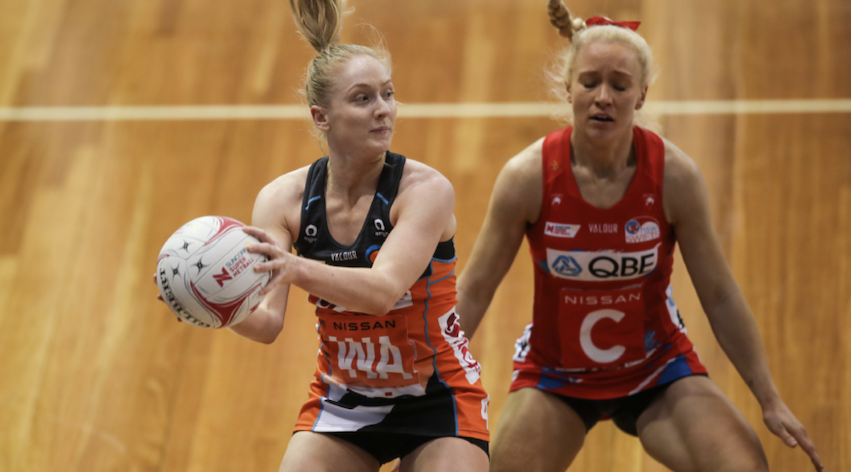 WITH uncertainty around the fixture still remaining, Draft Central has taken a look at each Suncorp Super Netball team, unpacking which players have gone about their business but have not necessarily received a wealth of accolades.

Although it has not been the best of seasons for the Adelaide Thunderbirds, one player that has developed at a rate of knots and relished the extra court time is Matilda Garrett. The former Collingwood Magpies goal defence has not skipped a beat since crossing to the T’birds with her defensive prowess on full show. Her dogged style of defence complements partner in crime, Shamera Sterling quite well as Garrett can easily double back on her goaler or go out roaming for the intercept with full confidence. Garrett can close down the space in the blink of an eye while her hands over pressure both over the shot and in play in general is a key element to her game play.

After a breakout season last year Molly Jovic has been one that has continued to impress in the black and white. Consolidating her role in centre this season, Jovic has not looked out of place with her two way running and netball smarts on full display. Often overshadowed by some of the bigger names at the club, particularly through the midcourt with the likes of Ash Brazill and Kelsey Browne in the mix, Jovic’s workrate and tenacity can go unnoticed – however she has proven to be a key cog for Collingwood. She is more than capable of playing any role thrown at her through the midcourt and does not take her foot off the pedal with her give and go mentality paramount to Collingwood’s recent success.

It would be fair enough to argue that Maddie Hay is not necessarily a quiet achiever given she won player of the match two weeks in a row, but the wing attack does go about her business playing a quiet and unassuming role. Combining with newcomer Sophie Dwyer and of course experienced campaigner Jo Harten, Hay has been the barometer for the GIANTS in season 2021. She is one of those players who is extremely influential with ball in hand, able to negate her opponent with her clever timing and use her vision into the circle to bypass the mess time and time again. With international talent and Diamonds all around her, Hay simply digs in hard and gets the job done time and time again and is unfazed by the physical attention she often receives.

One player that has steadily gone about her business in her debut season is Hannah Mundy. Thrown into the deep end this season due to the unfortunate injury to Liz Watson, it has taken some time for Mundy to hit her straps but she has steadily shown that she has the skillset and smarts to prevail. She has grown with confidence week in, week out with her timing around circle improving at a rate of knots alongside her composure and class with ball in hand. Factor in that she is still only just 20-years-old, and the developing talent has plenty to be proud of after stepping up this season, improving week on week alongside captain Kate Moloney.

There is no denying that the Swifts have a number of exciting players across the court that often draw the limelight but one player who has somewhat flown under the radar is up and coming speedster Tayla Fraser. The fancy footed midcourter has found a new home back in wing defence and has not skipped a beat. Often used as an impact player, Fraser offers drives and speed to slice through opposition teams and provide a bit of spice to the Swifts’ clinical style of play. Not the most defensively-minded player just yet, Fraser has proven to be a quick learner and most importantly can also ply her trade in centre or wing attack depending on the side’s requirements.

Although not an unfamiliar face to the SSN landscape, Lara Dunkley has well and truly upped the ante in season 2021 and has provided a level of consistency and composure for the Firebirds. The wing attack is class personified and is a really clever player with the way she is able to deliver passes into the circle for the Firebirds. Not the fastest or flashiest player out on court, what Dunkley does well is provide a steady head that is able to plant her feet and create a level of calmness in a frenetic Firebirds frontend headlined by the likes of Romelda Aiken and Gretel Bueta. Dunkley has impressed on the second phase with her good depth into the pocket while her strength around circle edge has allowed her to set up numerous attacking forays.

With a star studded line-up it can sometimes be hard to command the limelight, but someone that definitely deserves the attention this season is Maddy McAuliffe. Having played most of her career as a wing defence, McAuliffe has found herself in the centre role a lot more often this season and she has not skipped a beat for the Lightning. A real workhorse with a high endurance base, McAuliffe has proven she has the talent and workrate to impact both in attack and defence and can be the connection between the two ends of the court. Her combination with Laura Scherian and Mahalia Cassidy has developed throughout the season, with the midcourter digging into her big bag of tricks to continuously win ball back and highlight her class through the middle.

Another player that has taken like a duck to water in her new colours is Sasha Glasgow with the typical goal shooter adjusting to life as a goal attack and thriving. Glasgow is a very crafty player that has taken on the role as an impact player for the Fever with her ability to score from anywhere in the circle or provide a calming presence in attack when needed. More of a holding style shooter, Glasgow has added to her repertoire this season with her fancy footwork and overall spatial awareness to ensure she has a profound impact when playing out in goal attack. Not the most commanding or damaging player out on court, what Glasgow does well is present and create opportunities for the Fever frontend with her nicely timed drives and strength.