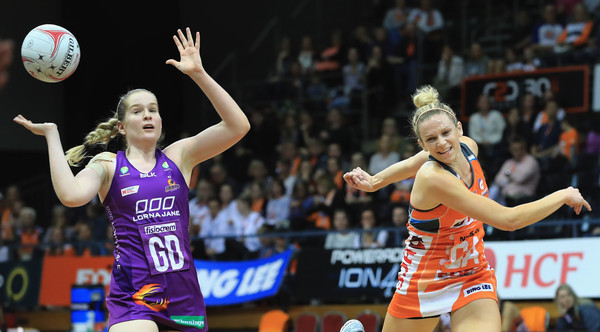 A DIAMOND of the future, Queensland Firebirds defender Tara Hinchliffe was dropped right into the thick of it throughout the 2019 Suncorp Super Netball season with the 21-year-old tasked with the challenge to hold up the defence end.

The young defender started playing netball at age seven, relishing the opportunity to get off the sidelines at her older sister’s game and get onto the court with twin, Maddie who is a training partner with the Firebirds.

“I absolutely love having a twin sister. We used to do everything together whether it was different sports but netball always seemed to be the thing we looked forward to the most.”

But Hinchliffe was not always a defender. In her junior years she often found herself under the post going for goal rather than defending it, but a stroke of genius from her coach saw her switch ends and pull on the goal defence bib.

“We both started playing shooter, we were always down the same end together so that was always fun,” Hinchliffe said. “I went down the other end and I didn’t really mind it and the coaches liked it because we were both tall. That’s how it all started, then I stuck in defence.”

Hinchliffe was lucky enough to be mentored by former Firebirds and Diamonds captain Laura Geitz last year, with the youngster picking up plenty of tricks of the trade from Geitz and crediting the talented goal keeper to making her feel so welcomed at the club.

“I guess for me coming in as a young player it was all sort of new for me so I could look to Gabi on one side and Geitzy behind me and know that they backed me in any situation and know what to do,” she said. “They would always be the first ones to respond and tell me what to do. I was more than happy to just follow their lead. That was a really good experience in my first year to know what it was like.”

The Firebirds struggled throughout the 2019 campaign only notching up the one win for the season ,but that did not stop captain, Simpson, from spurring on her troops and encouraging them to play their game and try their hardest.

“When you have a good leader you just want to play for them. You want to work hard for them,” Hinchliffe said.

“Gabi just likes to have fun. I love it when she smiles at you on court, she’ll make a joke and just lighten the mood so that’s something different that she brings and I think that works for our team because we are younger and we like to just enjoy it as well.”

Despite the trying season the Firebirds faithful have remained as boisterous and passionate as ever, with Hinchliffe absorbing the colourful and decorated culture associated with the club.

“I know this season has been one of the toughest seasons we’ve had, knowing the fans are still there makes it really exciting and you want to turn up and you want to work even harder for them which I think is special to the Firebirds, that I’m not sure all the other clubs have.”

The young defender has taken it all in her stride, absorbing the pressure and stepping up to the plate time and time again while her partnership with fellow 21-year-old Kim Jenner developing at a rate of knots.

“We both know we are young and are the biggest critics of ourselves. To know that we can both look at each other and trust each other. We often just get on court and look and say let’s just play netball, we don’t need to overthink it,” Hinchliffe said.

“We are both still very young to be playing SSN and both being 21 I guess we both look at each other and say can you believe that we are really here?”

Hinchliffe was immersed into the Firebirds last year with coach, Roselee Jencke a key figure in her life, helping to guide her down back and foster her netball skill.

“Sure there’s a lot of hard work but she’s also a great person and relationship builder. As soon as I came in I knew she’d look after me, she’s your biggest defender and protects us as well which we are grateful for,” she said.

Hinchliffe has already had a highly decorated career playing in the Under 21 World Cup in Botswana and was recently recognised for her impressive performance on the court with a call up to the Diamonds Development Team, an accolade she was not really expecting.

“Yeah it’s pretty crazy, I see myself being two years in SSN so I definitely wasn’t expecting anything to do with Australian netball. But it’s very exciting, I think the squad is a great opportunity to have a mix of the younger and more experienced girls,” she said.

“Any day to wear the green and gold dress is a good day, I remember Geitzy sending that to me a few years ago.”