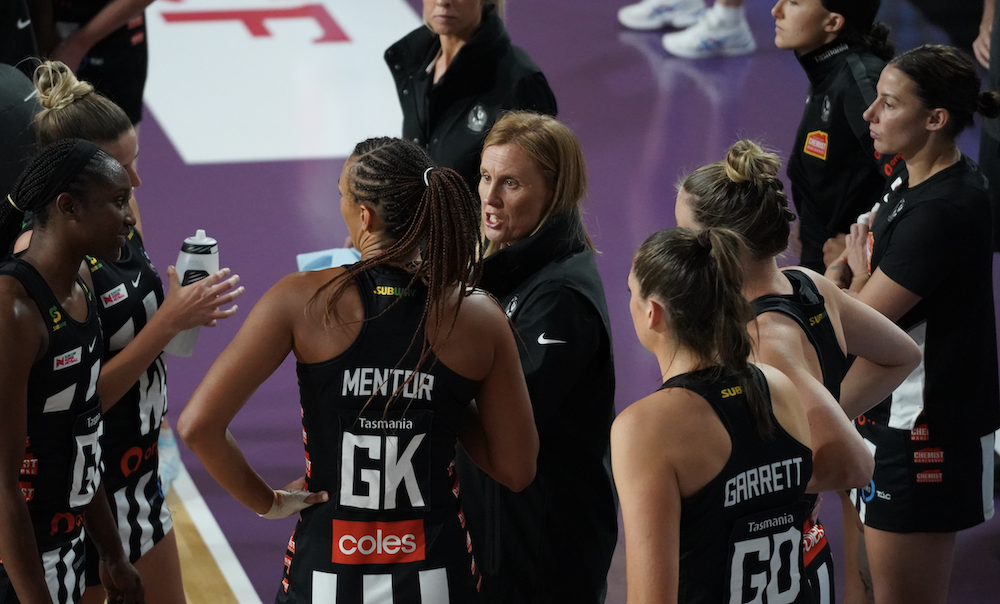 FINISHING the 2020 Suncorp Super Netball season as wooden spooners, the Collingwood Magpies have had a better start this season, currently sitting at 5th on the ladder – a position which coach Nicole Richardson is happy with for the time being.

“If you look at the top four teams (GIANTS, Lightning, Swifts and Fever), they’ve always had a consistent playing group, so it’s always going to take a little bit of time to gel on court…I think the more that we can play, the better the connections and combinations are going to work on court.”

Taking over from Rob Wright as head coach at the end of last year, Richardson and her assistant coach, Kate Upton, are the only two full time staff members at the club, with a lot of new part time staff joining the team this year. Adjusting to her new role, the high turnover of staff has been an off court obstacle that has gone unnoticed to the public eye.

“From that perspective, it’s been challenging, but in terms of the court stuff, I’ve throughly enjoyed the challenge.”

Richardson had a real challenge ahead of her at the start of the season, with the Magpies only having one win in 2020 against the Queensland Firebirds in Round 3. However, this year, they have welcomed back foundation player Ash Brazill, as well introducing defender Jacqui Newton from the Vixens and Trinidad and Tobago goaler Kalifa McCollin from New Zealand’s ANZ Premiership league.

“The girls have responded really well, they have really embraced the game plan which is exciting, and I think we are playing a good brand of netball at the moment, just need to continue to find that consistency week to week.”

Despite going down to the NSW Swifts on the weekend, the Pies were on a real roll, first beating the Adelaide Thunderbirds in Round 3, then the Firebirds in Round 4.

The depth for the Pies lies in their defensive end at the moment, with netball veteran Geva Mentor and international import Jodi-Ann Ward dominating in the ring. So for Richardson, a lot of the game plan she is trying to implement now is focused on the attacking end.

“Trying to let them play like a free game of netball, and you know, one of our big things we talk about being off the leash a little bit. So it’s that fine line just making sure that they get out on court and feel like they can play freely and play their natural game of netball rather than feeling under pressure or fearful of making errors,” she said.

“In order to challenge the top four teams from last year, we need to have a centre pass conversation up and around 70-75 percent, so that’s something we are going to focus on in our remaining matches.”

The training environment for the players has also been a major focus for the Pies this season as they look to add more strings to their bow to really challenge the top teams.

Looking forward to the rest of the 2021 season, there are a number of things that Richardson hopes to improve with the team.

“We still need to continue to find ways to win ball, and that might be having the courage to fly at something which might create something down the court as well…I think the main area for us and the main goal for us is to find consistency, not only week to week, but consistency across the four quarters as well,” she said.

“In order to be successful against [the top teams] and really challenge the top four, we need to really have a look at ways to reduce our turnovers, so being a little more patient in attack, and making sure we see all options and have our decision making sound.”

Collingwood take on the undefeated West Coast Fever this week and will be hoping for a full four quarter performance to topple the in-form side of the competition.