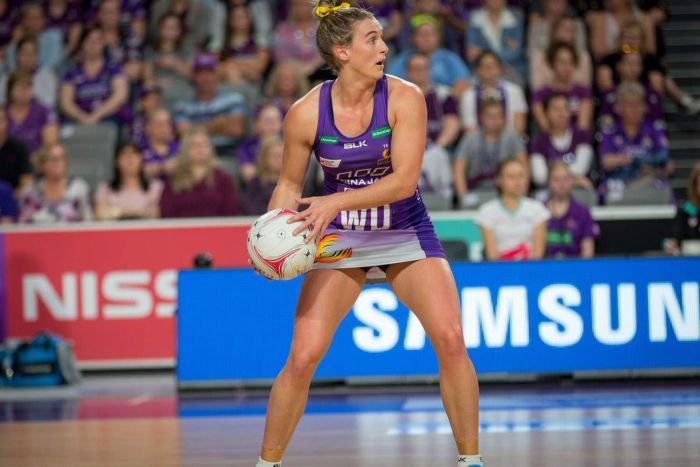 THE Queensland Firebirds got their pre-season off to a hot start crossing the ditch and claiming a seven goal victory (61-54) against reigning ANZ Championship premiers Central Pulse over the weekend. Both sides toyed with their line-ups throughout the contest in hope to find the winning combination with the lead also chopping and changing throughout the four quarters before the Firebirds put the foot down.

It was a sloppy opening couple of minutes for both sides with neither team able to settle and find their momentum in attack or defence. Balls went flying over the baseline before the Firebirds found their groove and opened up a five-goal lead midway through the term. Tippah Dwan got the start in goal attack with the young shooter taking full advantage of the opportunity thrown her way using her speed and dynamic movement to create space. Although she is not overly tall she used her strong hands and netball smarts to have an impact coming out of the circle and allowing goal attack Gretel Tippett to go to work under the post. Tippett led from the front using her extreme athleticism to poke holes in the Pulse defence often steaming past Karin Burger. Gabi Simpson had her work cut out for her in wing defence with Pulse wing attack Maddy Gordon darting around the court and hitting the circle edge with pace. Despite Queensland having an early lead the Pulse fought their way back into contention to draw even at quarter time.

The Central Pulse came out raring to go forcing turnovers and linking up across the court with ease. The Firebirds switched up their defensive combination in the second term with Tara Hinchliffe pulling on the goal defence bib pushing Kim Jenner to the bench. The connection between Hinchliffe and Rudi Ellis took some time to develop but as the quarter went on they applied a wealth of pressure on the likes of Silver Ferns captain Ameliaranne Ekenasio who was cool, calm and composed to post. Tiana Metuarau found her rhythm in the attacking third using her change of direction and speed to create confusion while also backing herself from range. Lara Dunkley also made her first Firebirds appearance with the speedy centre showcasing her strength around the circle edge to deliver well weighted passes into the circle. Dunkley paired well with Macy Gardner with the two finding good space and rotating through the attacking third to set up clever plays and draw the defenders.

Only one goal separated both sides at half time with the Firebirds evening things up early credit to some strong defensive play and hands over marking especially through the midcourt. In hope to find more fluidity across the court the Firebirds rung in the changes with Ine-Mari Venter pulling on the goal shooter bib while Dunkley switched into wing attack and Hinchliffe moved into goal keeper. Venter used her smooth movement and long range shooting to do damage for the Firebirds while the tried and tested combination between Hinchliffe and Jenner worked wonders with the two confusing the space and reading the play to pick off passes and cause hesitation in the feeders minds. Throw in Simpson and the Firebirds defensive trio looked like a well-oiled machine hunting the cross court ball and using their defensive pressure to limit the avenues to goal for the Pulse. Livewire Jemma Mi Mi also re-entered the game and did not skip a beat running at a million miles an hour and consistently re-offering across the court thanks to her clever positioning. After spending the opening half out in wing defence Katrina Rore moved into goal keeper with the highly touted defender using her hands over pressure, quick footwork and general netball nous to clog up space in the goal circle and reduce Tippett’s influence. Towering goal shooter Aliyah Dunn also built nicely into the quarter using her strong holds and good ball control to reel in long passes and shoot truly but copped a heavy knock and was forced from the court.

With a four goal lead their way the Firebirds motored ahead running rampant in the final term to keep the premiers at bay. Queensland ironed out their issues, finding strong connections across the court and most importantly backing one another. Despite, the Pulse getting the margin back to one goal in the early stages of the last quarter the Firebirds withstood the pressure and instead capitalised on their opportunities with their quick transition play and accuracy to post. Elle Temu was strong down in goal defence for the Pulse but struggled to find her feet at times up against Tippett and Venter. Gordon showed her class and potential using her quick hands and fancy footwork to remain a threat in the attacking third but the Firebirds did not waiver getting the job done comfortably.