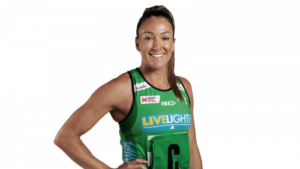 Charles has a unique versatility to her game that has helped the Fever with injury crises in the past. She is predominantly an attacking midcourter, playing out of wing attack or centre, but can roll back to wing defence if required. Over the past two seasons her numbers have picked up with the 29-year-old midcourter handing off an average of 17 goal assists per game. Having played in every season of the new Suncorp Super Netball, Charles has experience to go with her flexibility.