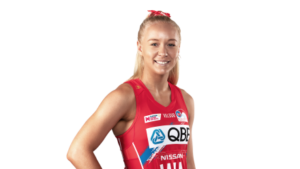 A real energiser bunny and tough competitor at any level, Fraser’s level-headedness earned her a couple of Super Netball caps last year with the NSW Swifts thanks to injuries aplenty. While she was fortunate to tag along with the side in its premiership season, Fraser well and truly proved her elevated position in the squad, taking on whatever came at her with her clean hands and precision with ball in hand. A real speedster with plenty of potential, Fraser’s footwork allowed her to find circle edge with ease, able to play through both wing attack and centre to apply pressure in attack. Her strong drives and speed off the mark enabled her to burst away from her opposition, driving the play down the court and feeding into the circle well. Meanwhile, her ability to assist her goalers with her positioning and ability to hold ground on circle edge allow her to feed with ease.