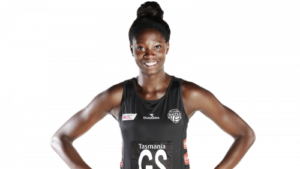 Nelson had big shoes to fill with Caitlin Thwaites gone in the off-season leading up to the 2019 season, and she exceeded expectations taking the competition by storm with her development. The young Jamaican shooter has impressive aerial abilities and can hit the scoreboard, but still needs some work to fully develop into the star player she is capable of becoming. Considering her age, Nelson is well on the way to being one of the most talented young players in the competition, and she had a huge breakout season with the Magpies, shooting 220 more goals than she did at the Thunderbirds the year before.

The talented goal shooter will have to shoulder the load in 2020 relying on her strong holds and silky footwork to hold off defenders. Although frazzled at times Nelson has come along in leaps and bounds and will be eager to once again prove her dominance under the post with her clever body positioning and strength under the post. Able to score at a rapid pace and withstand the double teaming of opponents Nelson is a force to be reckoned with in the goal circle and will only get better with time such is her skillset.