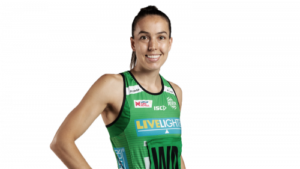 Eagland has shown resilience over the past couple of seasons after a knee injury in 2017 cruelly ended her season before it had got up and going. She managed just the three games that year and eight the next, then played in 12 coming off the bench in 2019. At 30-years-old, Eagland provides good support and depth for the Fever, and also an experienced head out at wing defence for the young Jess Anstiss who has grabbed the opportunity with both hands since Eagland went down with injury.