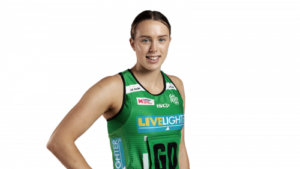 A young keeper who has been thrust into the spotlight of the Suncorp Super Netball on a number of occasions, Lewis is learning off one of the world’s best in Courtney Bruce. She played nine games in her debut season in 2019 when Bruce was having injury issues after plying her trade through the Australian Netball League. She won the league MVP, Coastal Sharks’ MVP and Grand Final MVP in 2018 which helped her force her way into the Fever team.