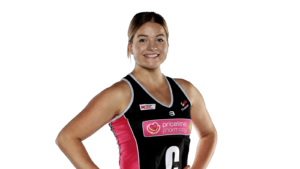 One of a number of Adelaide Thunderbirds young guns, Nankivell first appeared on the court last year as an injury replacement player. She is a dual sport athlete who also earned a contracted with the Adelaide Crows, but opted to focus on netball in 2019. She shows no fear whether she is playing out in centre or wing defence, and showed experience beyond her years to earn a full-time contract in 2020. At Australian Netball League level, Nankivell had a huge season for the Southern Force, winning the Most Valuable Player (MVP) and Players’ Awards at the end of the season.

She is a combative style player that is able to take a huge intercept when her side needs it and puts the hard yards in across the court to shut down any attacking options. Nankivell is quick off the mark and while she is renowned for her defensive attributes can also lend a hand in attack with her quick hands and general netball understanding.