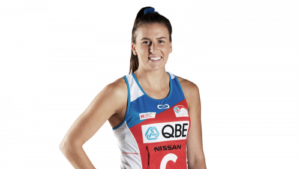 Hopefully returning from an anterior cruciate ligament (ACL) injury this season, the NSW Swifts captain will be eager to get back on court and dominate. Prior to her injury last year, Proud was in ripping form, carving up the netball court with her dynamic movement, speed off the mark and quick hands. Her vision into the circle was second to none able to seamlessly deliver into the likes of Sam Wallace and Helen Housby. Although typically renowned for her role out in centre, Proud did not skip a beat when in wing attack able to hold strong around the circle edge and showcase her attacking tendencies with her well-weighted passes and balance. Proud is a real energiser bunny on the court, often providing that spark and inspiration something she will be hoping to replicate this season, after falling to take the court in the second half of their premiership winning season.