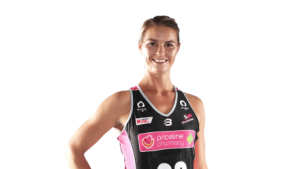 It was only a matter of time before the 187cm South African shooter earned a full-time contract in the Suncorp Super Netball. Potgieter spent three seasons in New Zealand playing for the Waikato Bay of Plenty Magic and Southern Steel, and then earned a call-up to the Queensland Firebirds at the end of last Suncorp Super Netball season. With the departure of Maria Folau over the off-season, the Thunderbirds saw a need for experience and accuracy under the post, and Potgieter provides that, being one of the world’s most accurate shooters. She also provides a point of difference in the circle and will be a focal point for a team that has a lot of youth in the attacking third.

Potgieter is an unconventional player that can cause headaches under the post with her quick fire shooting action, deceptive strength and aerial ability. Cool, calm and collected under the post Potgieter will be a real barometer for the Thunderbirds this season and offers a wealth of experience and netball smarts to impose herself on the competition on a regular basis. Her slick hands, fancy footwork and read of the play is what makes her such a prominent threat for opposition teams.