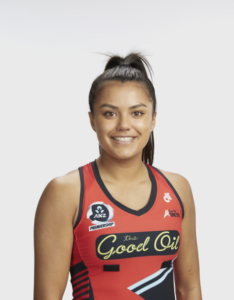 The speedy midcourter can set the tone of the team with her dynamic movement and clever ball placement. Although she is still developing her craft, Poi has come along in leaps and bounds with her ability to feed into the circle and create options inside the attacking third time and time again. She is a real energiser bunny across the court with her dynamic change of pace and silky footwork around the circle edge. With a more attacking mindset Poi can move between centre and wing attack with ease and possesses a wealth of flair to go with it. Only standing at 168cm the nippy midcourter relies on her fancy footwork and netball nous to have a profound impact on the netball court.