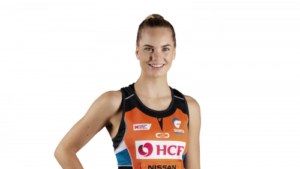 An attacking player who is traditionally a goaler, but has had to slide out to wing attack due to the GIANTS strength in the goal circle. With Australia and England’s main shooters – Caitlin Bassett and Jo Harten – occupying the goal shooter and goal attack positions, Austin has provided the feeds into the circle which suggest she is capable of playing that role permanently. Included in the Australian Diamonds squad, Austin is still young and capable of improving rapidly on the court. With both her teammates on the wrong side of 30, Austin could be one to watch in the coming years as she develops and lands as a shooter in the green and gold.

When in the goal circle the 186cm shooter is capable of holding her own and most importantly delivering. Able to shoot from a variety of positions in the goal circle Austin is able to glide into the circle or take the hard drive to draw the attention of defenders. Her strong movement and accurate shooting style creates plenty of excitement for the up and coming GIANTS star.