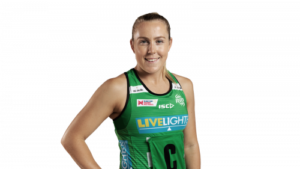 The 2018 Suncorp Super Netball Rising Star has been one to watch out west, having already collected a Fever Most Valuable Player award and then backed it up with the Rising Star a year later. She earned a place in the Australian Diamonds Development squad and has locked down a position at wing defence. Working hard with the experienced international duo of Courtney Bruce and Stacey Francis, Anstiss is one of a number of young up and coming prospects for the Fever in 2020.