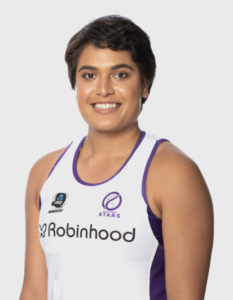 Returning from a serious knee injury that ruled her out of the 2019 ANZ Premiership season. The defensive midcourter returns to the Stars for 2020 after initially taking the court for the first time back in 2017 – the Stars’ inaugural season. Only just turned 24, Ioane can rotate between the wing defence and centre positions and has a hard edge to her play, hating to be beaten and with a high work rate. She also has the talent, coming through and representing the Silver Ferns’ 2017 World Youth Cup title-winning Under 21 side.