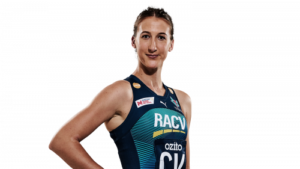 A real talent in goal keeper, Mannix sat on the sidelines for much of her career, learning off starting defenders and eventually proving that she could step up to the plate and be the gamechanger the Vixens were looking for. With an impressive read of the play and solid combination with partner in crime, Jo Weston, Mannix is a real ball magnet with her cleanliness both on and off the ball, while her evasiveness allows her to zip around opposition with ease for the loose ball or to dish out a deflection. Mannix has developed in spades over recent seasons, and while she did not get recalled to the Diamonds squad in 2019 for the Netball World Cup, proved she is more than capable of being at that level with a stellar second half to the Super Netball season, spurring the Vixens to a finals appearance.