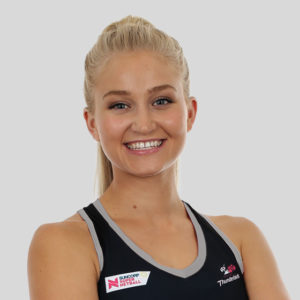 The exciting young gun grew up in South Australia and first became a training partner with the Thunderbirds back in 2016. She had to wait a couple of years before making her debut as an injury replacement player, and instead had a starring role in the Australian Netball League. After an impressive season over in New Zealand with the Northern Stars, Hodges returns full circle back to the Suncorp Super Netball, as a training partner. The shooter will team up with Glasgow as a future combination once her teammate is back on court, while Lenize Potgieter and Samantha Gooden will help provide great experience for the 22-year-old.

Hodges is a dynamic player that can light up the court with her quick footwork, speed off the mark and ability to create space. She can easily sight and deliver a pin-point pass to her fellow goaler under the post, such is her play making abilities. While she does not put up a wealth of shots it is her ability to draw the defender with her strong drives that makes her a threat for opposition teams.