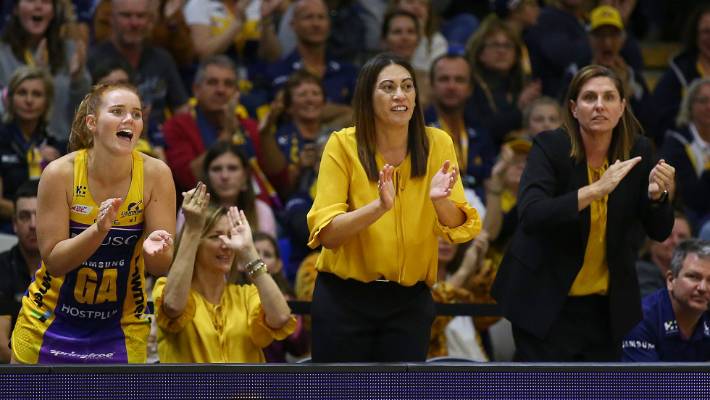 AFTER a gallant second half performance the Lightning fought back to run out victors by one goal against the Melbourne Vixens (55-56). Head coach, Noeline Taurua labelled the win as “massive considering [they] were down in the first half”.

It was an incredibly tight game with both sides tussling hard to secure the win with Taurua impressed by her sides effort to somehow work their way back into the contest.

“I kind of just had to sit back after the game and think how did we do that? Definitely giving respect to Vixens I thought… they came out to play right from the start and they were really strong,” Taurua said. “It was just a massive fightback and there’s really good signs coming out of that but there’s also I think consistent messages in that we can’t keep doing this to ourselves.”

The Lightning struggled in the opening half unable to move the ball down the court and have the same potency in attack as the competition had come to know.

“We were actually on the back foot quite a bit, I thought even though we were down by nine I think we got to the stage where we got enough ball but were coughing it up too much in our attacking end,” Taurua said.

Goal attack Steph Wood had a relatively quiet start to the game unable to have her same influence across the court. Wood made her way to the bench late in the first quarter showing that Taurua was not afraid to make changes bringing on Peace Proscovia and pushing Cara Koenen into goal attack in hope to spark something in the attacking third. With the attack end still struggling Wood re-entered the game midway through the third quarter with Taurua crediting Wood’s injection back into the game as pivotal in creating that attacking flair.

“She’s a great playmaker but also gets a bit of depth as well because sometimes she was too far outside of the circle and we had no link inside. You know when she does that she is really formidable and I thought she did that well especially in that last quarter, she was able to control that attacking end and she was very strong in that attacking end,” she said.

The win pushed the Lightning ahead of the Swifts snatching top spot off NSW by two points with Taurua pleased with her sides efforts to secure the elusive first position.

“I suppose the carrot of being number one is really enticing and we have never been in that position before,” she said.

“I think even though we were down you could start freaking out; I suppose but we were getting enough ball,” she said. “But I thought defensively we got a lot of ball so that’s really pleasing in one half or one end of the court but we just have to get the other end firing. “I think that when we do get that and it does happen it will be beautiful.”

With the Sunshine Coast looking to claim their third premiership the future looks bright for the Lightning but there are plenty of questions over who will coach the side heading into 2020 with Taurua possibly taking time off from the game.

“I’m coaching until the end of this year and working through what happens next,” she said. “Look what I definitely know is at this stage and I can put my hand on my heart is that I’m having a holiday at the end of SSN and I know that’s not good news or any news but I really do just need to pull off. “It comes a time when I just need to pull off because I’ve been running hard for the past two years. “From there I’ll get a better understanding of what I need to do next so that’s definitely a commitment that I’m making,” she said.

The Lightning are set to face the Adelaide Thunderbirds at home in their last home and away game of the season before the finals.