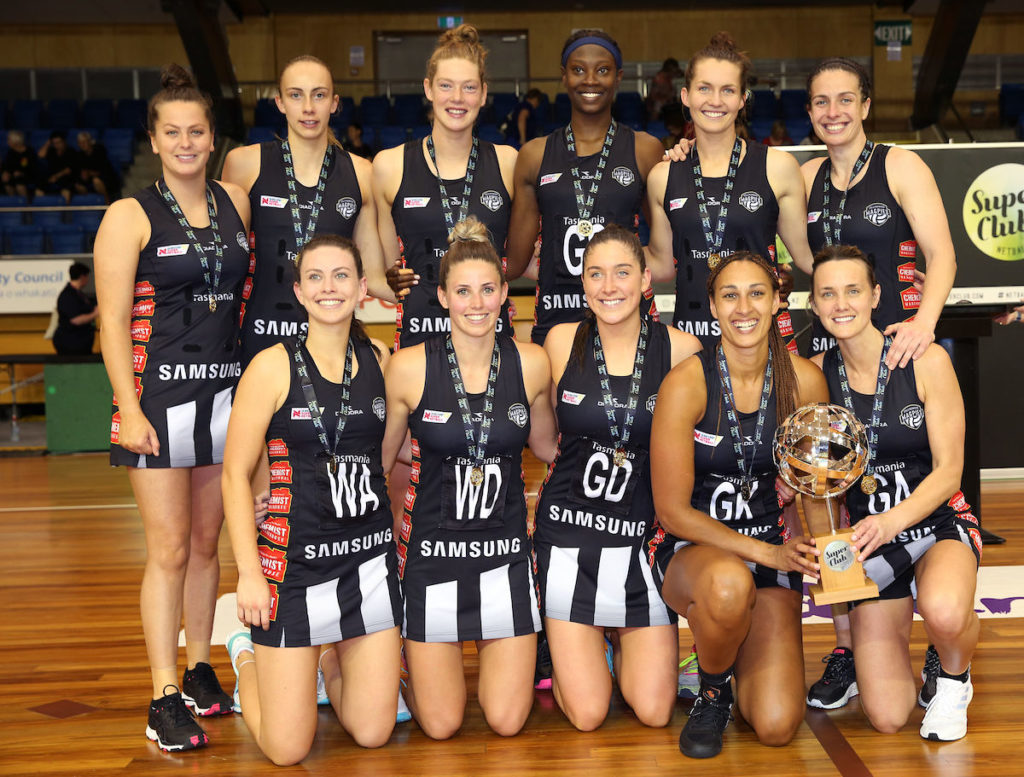 COLLINGWOOD Magpies have become the first non New Zealand-based side to take out the Super Club competition title, defeating Northern Mystics by seven goals yesterday. It was a tight affair throughout the contest, with the Magpies increasing the lead by a goal each term, before enjoying a bit more freedom in the last to secure the 49-42 victory. Nat Medhurst was named Most Valuable Player (MVP) after a mammoth effort of 17 goals from 18 attempts at 94.4 per cent accuracy, as well as 18 goal assists from 22 feeds.

The game started with Medhurst playing more than just an assisting role, nailing all five goals and assisting with four to partner-in-crime, Shimona Nelson. The Jamaican was strong under the post, grabbing a rebound and converting eight of her 10 attempts, while Ash Brazill and Gabrielle Sinclair combined for seven goal assists from eight feeds. Up the other end, Geva Mentor was using her experience to try and counter the talented Grace Nweke, taking a crucial intercept, but also giving away four penalties. Nweke scored 10 goals from 12 attempts and picked off two rebounds in the first term, while her fellow goaler, Bailey Mes had two goals from three attempts, as well as three goal assists from four feeds. Elisabeth Toeava was strong with six goal assists from eight feeds, while Phoenix Karaka continued her great form at goal defence with a couple of clever intercepts.

Leading by a goal at the first break, it was much of the same in the second term with the sides remaining the same throughout the first half. Three of the four shooters did not miss a shot in the quarter, with Nelson (nine) and Medhurst (three) combining for 12 goals, as Nweke (eight and a rebound continued to do everything asked of her). Medhurst had three turnovers, but also assisted with eight goals, making the most of her eight feeds thanks to her carefully crafted passes. Through the midcourt, Toeava was creating plenty of opportunities for the Mystics, racking up a team-high five goal assists from six feeds, while centre Tayla Earle had three from four and grabbed an intercept. Karaka and new defensive partner, Sulu Fitzpatrick also managed to intercept a Medhurst pass, with Matilda Garrett doing the same up the opposite end as both teams recorded five general turnovers for the quarter. Heading into the main break, the Magpies led by just two goals and the final was shaping up as a thriller.

Northern Mystics pulled the trigger on the first change of the match, bringing on goal attack Saviour Tui for Mes, joining Nweke in the goal circle. Tui shot five of a possible seven in the quarter, while her teenage goal-shooting partner did not miss from her limited five opportunities. Toeava continued her strong work aiding the goalers with six assists from seven feeds, while Brazill picked up the bid in midcourt with four from six herself. In the goal circle, Nelson (five goals) and Medhurst (six) were spreading the load perfectly and not missing a shot, while Mentor added another intercept to her name up the other end as her and Garrett were working on limiting the flow to Nweke. Melissa Bragg even picked up a goal assist – from wing defence – in the third term with a bullet pass into the circle. The Magpies had an extra turnover, but two less penalties in the quarter, and again increased their lead by a solitary goal to lead by three at the final break.

Nelson became an incredibly imposing figure under the post in the final quarter, shooting 10 of a possible 13 goals, and picking up three rebounds, though also giving away three penalties and a turnover. Medhurst shot three from four but had three assists, while Brazill was the key playmaker through centre with six assists from seven feeds and one of her memorable intercepts. Mentor had yet another intercept in the defensive goal circle as the Mystics forward half started to falter and make a few more errors because of the raised pressure stakes. Mes returned to the court in the only other change, nailing two goals from three attempts along with three goal assists, but also four had turnovers to her name. Nweke managed another seven goals from eight attempts and a rebound in the quarter despite the pressure, while Toeava had nine feeds, five of which were goal assists and two were turnovers. She had three penalties, one less than Karaka, though the Mystics recorded three less for the entire term compared to their opponents. It was the nine to six turnovers that cost them in the end, with the Magpies piling on 13 goals to nine and winning, 49-42.

Nelson played a crucial role beside Medhurst in the goal circle during the final, shooting 32 of a possible 37 goals at 86.5 per cent accuracy, but collecting four rebounds. Up the other end, Nweke had 30 from 33 at 90.9 per cent, and also had four rebounds, but an equal game-high seven turnovers. Her goaling partner had seven turnovers too, with Mes finishing the game with seven goals from 10 attempts, and eight goal assists from nine feeds. Toeava was arguably the Mystics best, assisting with 22 goals from 30 feeds, while Karaka picked up five intercepts and 12 penalties. The other Mystics player to hold up the defensive end in an honest, hard-working game was Michaela Sokolich-Beatson who had one intercept and just four penalties opposed to Sinclair, who played out of her traditional goal attack position to give off seven assists from 12 feeds. Brazill won the centre battle convincingly against Earle, helping herself to 17 goal assists and one intercept, while Earle had seven and one. Garrett picked up a rebound and an intercept for the Magpies, while Mentor was at her clever best, picking off three balls up the defensive end. The Magpies were slightly a class ahead which resulted in the win during a game that showed the best ANZ Premiership sides can compete with the Suncorp Super Netball (SSN) teams for large portions of the game – granted the Magpies were missing a couple of Diamonds in April Brandley and Kim Ravaillion from last season.

The Central Pulse bounced back from their loss to the Magpies to post a come-from-behind two-goal win over the Magic to claim third spot for the tournament. Leading by a goal at quarter time, the Pulse slipped up in the second term as the Magic slammed home 15 goals to nine to lead by five at half-time. The Pulse stole back the momentum with a 16-10 quarter themselves to lead by a goal heading into the final term, then extending that out to two by the final whistle in a 47-45 victory. Aliyah Dunn scored 32 goals from 35 attempts, while Tiana Metuarau had four from four, and a team-high 16 goal assists from 20 feeds. Katrina Rore was at her absolute best up the other end with three rebounds and an intercept, working well with Elle Temu who had one rebound and two intercepts as the Pulse rested Karin Burger. The Magic goal circle partnership of Kelsey McPhee (31 gals from 40 attempts) and Georgia Marshall (10 from 11) was strong despite McPhee’s inaccuracy, as Whitney Souness was the key in midcourt with a game-high 18 gaol assists from 26 feeds, and a key intercept.

Southern Steel grabbed fifth spot with a terrific last quarter to overrun Mainland Tactix in a huge contest. The Steel burst out the blocks in the opening term to score 15-12 and take an early lead. The teams broke even in the second quarter before the Tactix took control, and the lead thanks to a 14-10 third stanza. The Steel decided to have none of that, blowing their opponents away in the final quarter with 14 goals to eight on the way to a 50-45 triumph. Jennifer O’Connell was massive at goal shooter, despite being inaccurate, posting up 38 goals from 51 attempts, as Kalifa McCollin managed nine from 11. Gina Crampton was busy through midcourt with 19 goal assists, but a game-high six turnovers, while Shannon Saunders had 14 goal assists from just the one turnover. In defence, Te Huinga Selby-Rickit had three intercepts and one rebound. For the Tactix, up the same end as her sister, Te Paea Selby-Rickit shot 10 goals from 15 attempts at just 66.7 per cent, while picking up two rebounds and handing out eight goal assists. Ellie Bird was the key goal shooter with 31 from 36, while having a game-high five rebounds in the contest.

In the battle of the two bottom sides, it was Northern Stars who handed the Wasps the last place honours thanks to a convincing 11-goal win. The Stars led by two goals at the first break then dominated the second to hold an eight-goal advantage by half-time. The Wasps hit back to make it a more manageable six-goal deficit by the final break, before Northern took control once again, piling on 15-10 in the final term to claim the 52-41 victory. Stars’ shooter, Maia Wilson poured on 34 goals from 44 attempts, had five rebounds and seven goal assists from eight feeds, while Jamie Hume had 14 goals from 17 attempts, as well as seven goal assists and an assist. Kate Burley was reading plays like a picture book up the other end with four of her team’s nine intercepts, while Mila Reuelu-Buchanan had a game-high 18 goal assists from 37 feeds. For the Wasps, veteran shooter Rachel Dunn scored 28 goals from 32 attempts, as well as three rebounds close to the post. Katie Harris helped out with 12 from 14, and five goal assists, as Beth Dix worked hard in wing attack thanks to 11 goal assists from 21 feeds. Up the other end, Josie Huckle managed three rebounds.