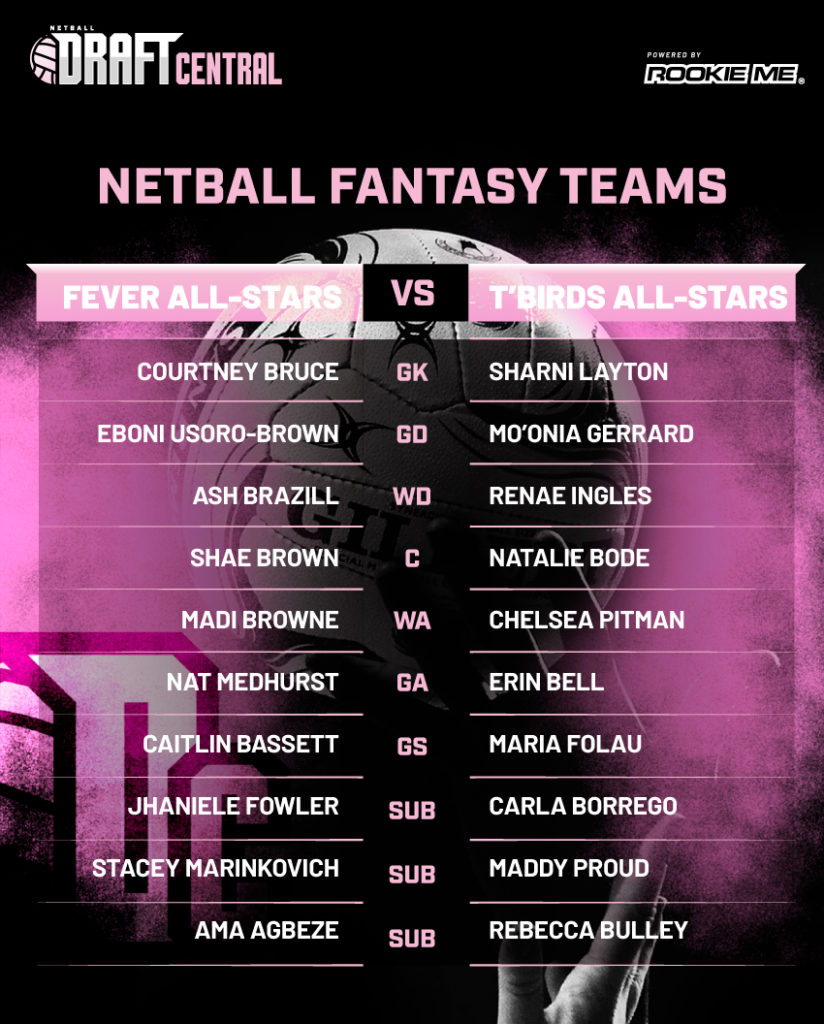 THE West Coast Fever and Adelaide Thunderbirds have a highly decorated history with both clubs boasting a long line of a-class players since their inception. Draft Central has comprised two All-Star teams filled with past and present players.

Although they have not tasted a lot of success throughout their time in both the ANZ Championship and Suncorp Super Netball, the West Coast Fever has been home to a wealth of highly talented netballers both from an Australian and international perspective. When it comes to the goal circle the Fever have been littered with stars none bigger than Australian Diamonds captain, Caitlin Bassett. The towering goal shooter really made a name for herself under the post for the Fever with her strong holds, lanky arms and volume. Her connection with teammate and fellow former Diamond Nat Medhurst was near on unstoppable. Medhurst was the real playmaker inside the attacking third with her impressive balance, vision and ability to think two steps ahead of her opponents. While she did not put up a high amount of goals it was her off the ball work that made her such a damaging player.

Moving into wing attack is Madi Browne. The speedy centre court player oozes strength and excellent ball handling skills to deliver the ball with precision to the goalers. Shae Brown was a key contributor for the Fever, spending almost ten years at the club using her energiser bunny speed to dart around the court and cause havoc. The centre proved that she could run all day and was not afraid to put in the hard yards taking the strong drive to the top of the goal circle. It is no surprise that wing defence come centre Ash Brazill gets the start in the All-Star Fever team given her sheer athleticism, speed off the mark and ability to make something out of nothing. Brazill quickly developed into one of the most influential players with her defensive pressure constantly on show and desperation to attack the ball.

Down in defence is England Roses goal defence Eboni Usoro-Brown who is renowned for her body on body pressure, physicality under the post and ability to pick off intercepts. She is light on her feet and uses her long arms to cause confusion for the feeders looking into the circle. Current captain and Diamonds keeper, Courtney Bruce takes out the goal keeper position thanks to her tenacity and impressive leap. She does not take a backwards step on the court, consistently looking to take on the physical tussle and use her quick footwork to get around the body of her opponents and force tips and turnovers.

Rounding out the team is Jamaican shooting powerhouse Jhaniele Fowler along with former England Roses captain Ama Agbeze, while coach and former midcourter Stacey Marinkovich also earned herself a spot on the All-Star team.

Over the years the Adelaide Thunderbirds have added to their trophy cabinet and experienced their fair share of success. With that success has come some highly talented players filtering through the club such as former Australian goal keeper Sharni Layton. She was one of the most dynamic and physical defenders in the game, renowned for her constant niggle and innate ability to go screaming out for an intercept. Her constant movement, hands over pressure and sheer pressure was a focal point of her game much like her defensive counterpart Mo’onia Gerrard. The goal defence was strong both in the air and at ground level, hustling for every ball that came her way and not giving her opponent an inch. Gerrard used her speed off the mark to force turnovers and apply pressure.

In at wing defence is none other than Renae Ingles. Arguably one of the most profound and impactful wing defences in the competition Ingles was the heart and soul of the Thunderbirds for many years, thanks to her on-court leadership and netball nous. Her go-get it attitude, long reaching arms and innate ability to sense the moment and make something special happen was second to none. Another former captain in Natalie Bode takes out the centre position with the dynamic midcourter able to run all day and ply her trade across the court. Her precision ball placement, strength around the goal circle and impressive vision made her hard to stop when on song. While in wing attack is England Roses and current Thunderbirds co-captain Chelsea Pitman. She is a smooth mover, that boasts plenty of class with ball in hand and a high level of execution.

The goal circle is full of long bomb specialists with yet another former T’birds captain and Australian Diamonds shooter, Erin Bell taking out the goal attack position. Her high release sky-scraper shots, silky movement across the court and cool, calm temperament was a key reason to their success. She was not afraid to back herself from range and showcased her spatial awareness every time she was on court. While she only spent one season with the Thunderbirds, Maria Folau had an undeniable impact in the goal circle with the long bomb specialist well and truly living up to her name. Her effortless shooting action and accuracy to post proved to be the key for the Thunderbirds throughout the 2019 season.

On the bench and unlucky not to get a start is defender Rebecca Bulley, renowned for her tagging style of play, while former basketballer Carla Borrego and fan favourite Maddy Proud both also got the call up.

Although the Adelaide Thunderbirds have won more premierships than the West Coast Fever throughout history, it is hard to go past the quality talent on the list. The Fever probably have the upper hand when it comes to goalers with the likes of Fowler, Medhurst and Bassett all at their disposal. Defensively both teams are stacked but the scales tilt towards the Fever given their extra depth.

Who wins this All-Star battle of the West and South?
Created with Poll Maker