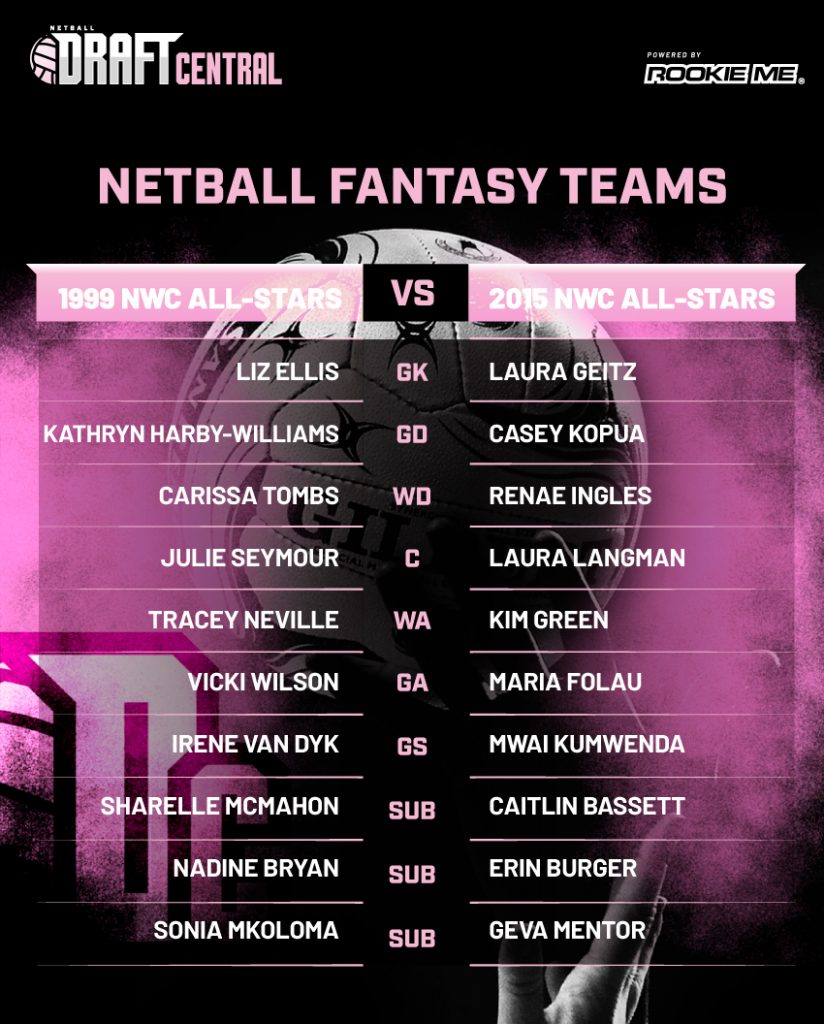 OVER the years there have been some a-class players grace the court with them all coming together at the most coveted event in the netball calendar. With so many influential players from varying countries Draft Central has made a team from the 1999 World Cup and 2015 World Cup compiled of star players from the respective tournament.

Five different nations feature in the 1999 World Cup team with Australia holding a few extra places in the squad after taking out the gold medal. It is no surprise that goal keeper Liz Ellis gets the nod with the Australian defender putting her best foot forward throughout the 1999 World Cup. Her court coverage is impressive with the 183cm defender able to swat away any balls that came her way and propel it back down the court. Joining partner in crime is Kathryn Harby-Williams with the goal defence impressing with her hands over pressure and ability to take a timely intercept thanks to her vision and anticipation.

In wing defence is Australian Diamonds representative Carissa Tombs. The centre court player knows how to block her opponent with her quick footwork and clever body positioning around the circle edge. Through the midcourt versatile Silver Fern, Julie Seymour takes out the centre position. Renowned for her defensive pressure and no-nonsense approach Seymour starred across the court and was more than capable to deliver perfectly weighted passes into the goalers. Tracey Neville could move between both wing attack and goal attack and given the star power throughout the 1999 World Cup found herself out in wing attack in this team. She is crafty with ball in hand and can find space with ease.

Moving into the circle it is headlined by none other than shooting sensation Irene Van Dyk. Although she is more renowned for her time with the Silver Ferns, Van Dyk took charge for the Spar Proteas in 1999 with the goaler able to slot them with ease. Her fancy footwork and accuracy to post is what makes her so hard to stop, able to command the ball and score truly. In at goal attack is Diamonds goaler Vicki Wilson who made her presence felt in the gold medal match with her attacking intent and desire to go to post.

On the bench is Sharelle McMahon who made her World Cup debut in 1999 and proved to be a key cog for the Diamonds attacking unit while Jamaican midcourter Nadine Bryan and England defender Sonia Mkoloma round out the team.

The team is top heavy in Diamonds players, thanks to Australia taking out the gold medal at the World Cup and Silver Ferns notching up the runners-up trophy. Defensively the 2015 team is quite strong with former Australian Diamonds captain Laura Geitz taking out the goal keeper position given her dominance and impressive on-court leadership. Her ability to make something out of nothing and use her long limbs to get hands to ball made her simply unstoppable throughout the tournament. Joining her down back is Silver Ferns defender Casey Kopua with the goal defence well recognised for her intercepting skill and go-go gadget arms to pick off errant passes.

In the midcourt it is hard to go past the likes of Laura Langman with the talented centre able to run all day and all night. Her endurance base is second to none and is a real barometer for the Ferns with her gut running, impressive ball handling skills and sheer athleticism. The wing defence position goes to Renae Ingles with the quick footed defender able to cover the court with ease and use her speed off the mark to force turnovers. Moving into wing attack is Diamond Kim Green, the electric wing attack simply sliced through the defence with her pin point passes and impressive balance around the circle. Throw in her speed off the mark and dynamic change of direction and Green was an easy choice.

New Zealand specialty long bomb shooter Maria Folau impressed throughout the 2015 campaign with her cool, calm and collected mentality at the forefront of her game play. She is light on her feet and can sink them from anywhere in the circle such is her accuracy and range.  Malawian goal shooter, Mwai Kumwenda took the competition by storm with her accuracy to post and unconventional style of play. The flamboyant goaler showcased her aerial ability throughout the 2015 campaign starring time and time again with her strong hands and balance.

Rounding out the bench is current Diamonds captain Caitlin Bassett while South African midcourter Erin Burger is also amongst the mix. The final spot on the bench goes to England Roses star and talented defender Geva Mentor.

Both sides are littered with a host impressive players that are renowned for their game changing abilities and dynamic movement and while it is difficult to decide which team would have more of a competitive edge the 2015 side has that extra touch of class. With stars on the bench the 2015 squad oozes depth and star power with each player able to burst onto the court and have a profound impact.