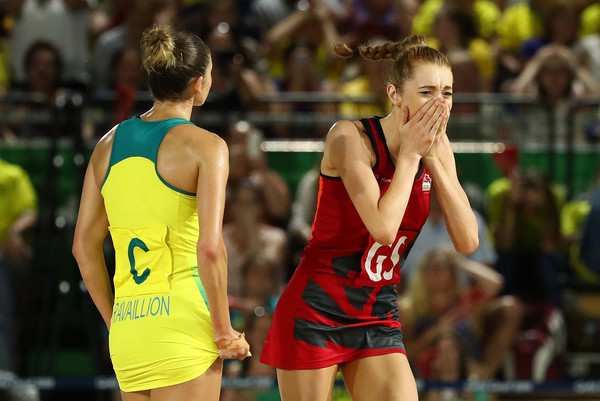 WITH netball taking a back seat to the coronavirus in 2020, Draft Central is taking a look at memorable matches in world netball history. Next up is England’s inaugural Commonwealth Games gold, defeating Australia by one goal on home soil in 2018.

A memorable match for many Aussies – and not in a good way, the 2018 Commonwealth Games gold medal match was one for the ages as England quite literally pipped Australia at the post to reign supreme. While Australia led the competition in majority of the stats, this was England’s opportunity to topple to Diamonds for the first time and they were not about to let their greatest gold medal chance slip away. England may have been the underdogs, playing in their first ever Commonwealth Games gold medal match, but it was that goal which saw the Roses turn it out on Australian soil.

With ultimately one of the greatest lineups England has ever hand – perhaps only rivalled by their current list – they were just too strong for the overconfident Diamonds who faltered at the final hurdle and could not compete with the tenacious Roses when it came down to the nitty-gritty. For the Diamonds, the match came down to extensive rotations which the side had dealt with throughout the entire tournament. The Roses however came in with a different mindset, only rotating as they saw fit and able to form a consistent barrier against the formidable Aussies.

It was an even start by both teams, with neither team really able to find much momentum such was the impact all 14 players were having on court. The two sides were evenly matched with both goal keepers in Laura Geitz and Geva Mentor forming tough barriers in their respective circles. Mentor racked up a whopping 12 gains throughout the match, putting on a clinic with her cleanliness and the ease with which she found the ball, using goal shooter Caitlin Bassett’s consistency against her. Geitz and April Brandley were solid as ever, fairly clean in their defence and finding plenty of loose ball.

While Australia started out clean, not finding much whistle, the two sides evened up as the match went on, seeing the Roses clean up their act and forcing errors from the Diamonds who seemed out of sorts with the closeness of the game – which saw both teams even at 25 goals apiece at half-time. Liz Watson entered the game to take on the likes of Serena Guthrie, providing some real gut-running against the star centre. While it took some pressure off the attack with Watson’s quick hands doing wonders, Guthrie’s overall athleticism is tough to overcome while her immense endurance saw the midcourter continue to ply her trade and propel the ball back up the court.

The Diamonds got back into the groove in the third but while they had the goals on the board, the side seemed out of sorts thanks to the constant pressure applied down the court from the Roses. That being said, Australia’s full court defensive pressure impressed with just the four goalers not picking up gains – but it was the constant changing of goalers that seemed to work in England’s favour.

For the Roses, there were little changes throughout, with only some small impact options taking the court to ply their trade. Goalers, Jo Harten and Helen Housby were consistent from the start and had a couple of patches where their defenders were on top, namely the beginning of the first and third quarters thanks to Australia’s rotation for fresh feet in Courtney Bruce and Jo Weston, but ultimately continued to ply their trade and coming into the final quarter were well aware of what had to be done to win the game despite a slower third term.

Full credit has to be given to England’s final quarter effort, shooting 16 goals to overcome Australia’s three quarter time lead and forcing error upon error from the Diamonds. England was just much cleaner with ball in hand, treasuring possession where Australia seemed to throw away far more ball than their typical game. Australia all but fell apart in the final term, collecting a whopping 25 penalties – 22 contacts – compared to England’s 10 overall. When you compare that number to Australia’s seven penalties overall in the first quarter, it’s hard to not think of what could have been if the consistency had remained from the beginning to end.

It was a goal on the buzzer from Housby which cemented the win for England, making history as the Roses collected their first Commonwealth gold, well and truly earning the win against the reigning champions, 52-51. At the post, Harten topscored with 34 goals at 87 per cent accuracy, while Bassett was not quite as influential with 22 goals from 24 attempts – though she did miss out on the third quarter. Housby came in next with 18 goals while Steph Wood and Susan Pettitt shot 12 and 11 goals respectively to provide another option in the circle.

The consistency of Gabi Simpson was impressive, with the athletic midcourt defender the only Aussie to play out the full 60 minutes. Simpson used every inch of her pressure to impact on the Roses’ ability to find the goal circle, impeding former Australian representative Chelsea Pitman from finding avenues to the ring and providing impressive speed and pressure up the court. Pitman racked up 18 goal assists from 28 feeds, while Watson was not far behind with 17 assists from 27, only having played the three quarters. Geitz racked up five gains in her half on court and was well and truly missed in the final quarter, while Simpson’s consistency and pressure saw her collect four gains and Guthrie three with her threatening speed.