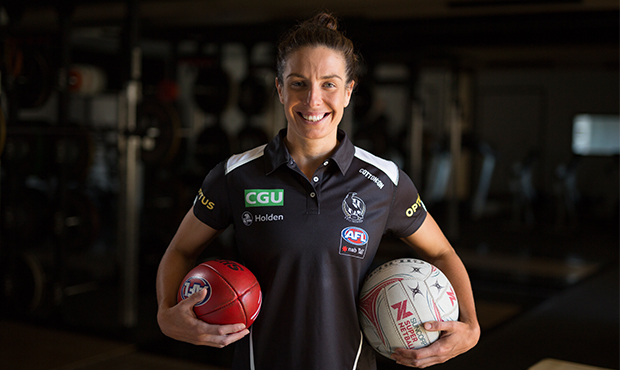 WHILE the Australian Diamonds are getting ready for a busy international calendar, two big name Aussie netballers have laced up their boots ready for another sport this summer.

Brazill plays for Collingwood Magpies in both AFLW and netball, with all training conducted at Collingwood’s home, the Holden Centre, in Melbourne’s sports precinct. Fortunately the two sports are played at different times of year, allowing Brazill to play in both codes throughout their respective seasons.

“If I think about my journey it’s like, with netball, I’ve done it from such a young age that it just comes so natural … I’ve always loved football but there’s never been that path where you could even go anywhere,” Brazill said. “It’s pretty funny to just go like from netty to footy … when I’m on the court I’m a netballer, when I’m on the field I’m a footballer. I never am one time playing and feeling like I’m at the other so that’s a good thing!”

One of the most challenging aspects of making the switch between the two sports for Brazill is how the different dynamics of the grounds can change the outcome of a game.

“You know that stepping on a netball court it’s 30 metres long, the court doesn’t change no matter where you go in the world,” Brazill said, comparing AFLW to the indoor sport of professional netball. She jokingly told her AFLW teammates that on court ‘sometimes the aircon is like, a little bit high’, while training in wind, rain or shine on the field.

“With AFL every ground is different … our ground here that we practice on is a lot wider, and our first game was in Geelong and it’s so super narrow, so it completely changed the way we play,” Brazill said.

While the move from court to field has its own difficulties, Brazill says the switch to AFLW has been a big change because of the growth and amount of players as well as the immense skill displayed on the field.

“For me at the moment it’s trying to figure out who these girls are. In netball I know every single player, I’ve grown up with them, it’s going into my tenth season so, like – Kim Green, I could tell you what she’s gonna do before she’s gonna do it and she could tell you the exact same for me,” Brazill said. “Last year I tore my hammy and missed about five games or something, and came back in Round 6 and played against Sabrina Frederick-Traub, so that was probably the most kind of pressure playing on one of the best in the league.

“In netball you know these players inside and out and then you walk on the field like – Sabrina I knew because her face was everywhere for the AFLW, but how she plays? No idea. She’s just like a machine. So like I guess you can know them a little bit by watching her game but it’s so different playing them.

“You’re playing girls when you don’t even know their name yet, and it’s a mystery … sometimes you feel like you’re going in there blind but I kind of like that as well, because they don’t really know too much about you either.”

As for playing at Victoria Park, home of the Magpies long before the competition’s demand outgrew the stadium, Brazill said the feeling of running out onto the field for the Round 2 clash against Melbourne was “unreal”.

“Our fans at Collingwood are so loyal that it was like we were going back to like our home ground. We got told a bit of history before going out … Collingwood was the first ever club to have a female stand, so like, just having that history alone and then being the first AFLW team to play out there was pretty cool,” she said.

As for her phenomenal tackle on Melbourne’s Tegan Cunningham, Brazill said she was mostly focused on her tackling technique to ensure she did not get Cunningham in the back or injure herself.

“In that moment I think someone went to tackle her and she slipped them … I just saw her and no one was in front of her and you just like – instinct takes over. I can’t even really remember it to be honest,” tells Brazill. “I’m just like lucky that I got her, if I didn’t get her it would’ve been embarrassing!”

When it comes to balancing AFLW and netball, Brazill says that her training workload is managed to ensure she does not put her body under too much stress, though her 2018 season was completely different.

“With netball we train every day – we’re in here from like 7am to like 2pm, and then footy we train three times a week and so that’s from 6pm, we probably leave the club at 10pm at night,” Brazill said.

“At the moment we have a physio that’s overlooking both … he monitors what I do. Last year it was tough, like we didn’t have that so I just ran everything and then now he’s like ‘you’re doing this for this long, then do the last rep off’, so like I’m still doing everything but I might do like two less reps than everyone else.”

Australian Diamonds gold medallist, dual Netball World Champion and ex-Magpies Netball goalkeeper, Sharni Layton has joined Brazill on the field in 2019, making the hop to AFLW after announcing her retirement from netball at the end of the 2018 Suncorp Super Netball season.

Brazill said it was no surprise to see Layton make the change, having spoken about it when Brazill decided to take up footy in 2017.

“It’s very different for Sharns, like I played footy growing up, Sharns hadn’t … skill wise she’s gone from being like the best netballer in the world, to someone who’s learning how to kick a football. From her very first session to now, she’s improved out of sight,” Brazill says of Layton, who has been a close friend since age 18.

“She doesn’t have a leader badge in our team, but she’s definitely one of our leaders that has been really helping teach the young kids what work ethic is at training and how to recover properly,” Brazill said.

“When we’re training she’s full forward; I’m full back, so we’re on each other! It’s hilarious,” she said.

While Brazill is currently loving her footy, she says there are still some netball habits she can’t shake.

“I fake tan before every game – classic netballer – ‘look good, feel good, play good! When I was coached by Norma Plummer the only time she ever benched me was the day I didn’t fake tan, and she thought I was gonna pass out … I’m so weird about it, like even with footy the girls are like ‘you act like you’re this tough kid and then you come in fake tanned’. I’ve got to, I’m a netballer!” Brazill said.