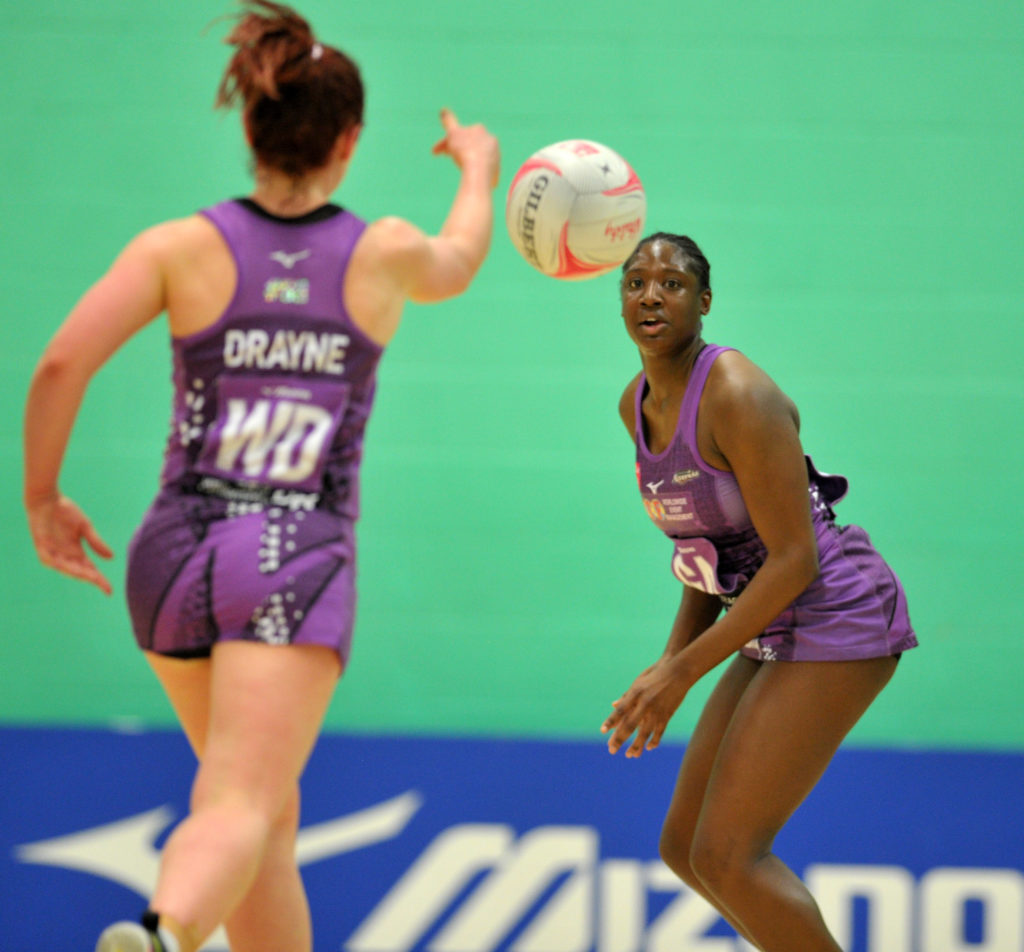 EXPERIENCED England Roses player and Saracens Mavericks shooter, Kadeen Corbin is no stranger to the spotlight having played many years at both an international and domestic level.

Corbin grew up around netball with her sister Sasha Corbin leading the way. Sasha was instrumental in establishing Kadeen’s interest in the sport, dragging her along to her games and sparking her younger sisters desire to pick up a netball. Kadeen did not officially start playing until she was 12 years old, but that did not seem to affect the naturally gifted netballer.

“[I] watched Sasha at a club training session,” she said. “Started shooting on the side and couldn’t get it in. “Once it went in, I wanted to try it for real loved it and have not looked back since.”

Corbin is renowned for her hard work and tireless effort on the court and does not take no for an answer, constantly trying to improve and up-skill herself in any way possible. Her journey has been eventful, making the Roses side in 2011 and has played over 50 caps for her country. The goal shooter come goal attack takes great pride in pulling on the red dress for England.

“It’s exciting and it’s something you work hard for,” she said.

But she did not reach the highest level of netball without devoting hours to training and fine tuning her skills highlighting the measures she takes to ensure she remains at an elite level.

“Training hard and enjoying my journey,” Corbin said. “When I didn’t make a squad I took the feedback and worked hard on my area of improvement.”

Even after all her years of playing netball, Corbin still follows a pregame ritual to get her head in the game and prepared for the match ahead both at an international and league level.

“[I] always have 15 minutes at the post to shoot with my match day playlist playing in my headphones,” Corbin said. “Then enjoy the last prep with the team, before going out.”

While individual performance is important, Corbin enjoys the camaraderie and team element associated with the sport. Netball is about more than just the outcome for the 27-year-old with the shooter valuing the friendships and adventures with teammates she has encountered along her journey.

“The family feel. When your teammates have your back in court,” she said regarding her most valued and enjoyable aspect of playing netball.

Throughout her career, Corbin has had many highs such as featuring in England’s international side and competing at large worldwide competitions. But the major standouts for the shooter seemed to come against playing Australia. Renowned as the number one netball nation in the world, the England Roses goaler seemed to take great pride and joy out of winning against the Diamonds.

Corbin has played in a variety of different leagues across the world such as the ANZ Premiership and is currently playing back home in the Vitality Netball Superleague (VNSL) with the Mavericks. During her time in the ANZ Premiership, Corbin played for the Mainland Tactix alongside the likes of Ferns defender Temalisi Fakahokotau and New Zealand great Anna Thompson. Now with the Mavericks, Corbin is joined by her sister, Sasha, Australian shooter Karyn Bailey and youngster George Fisher.

Playing with her sister seemed to be a pretty exciting and important milestone in Corbin’s life having shared so much of her netball journey with her.

“It’s pretty cool. It doesn’t feel any different whether it’s club or international,” she said.

With the Commonwealth Games fresh in her mind, Corbin will be looking to earn her spot in the Roses squad for the upcoming World Cup hosted in Liverpool in July.