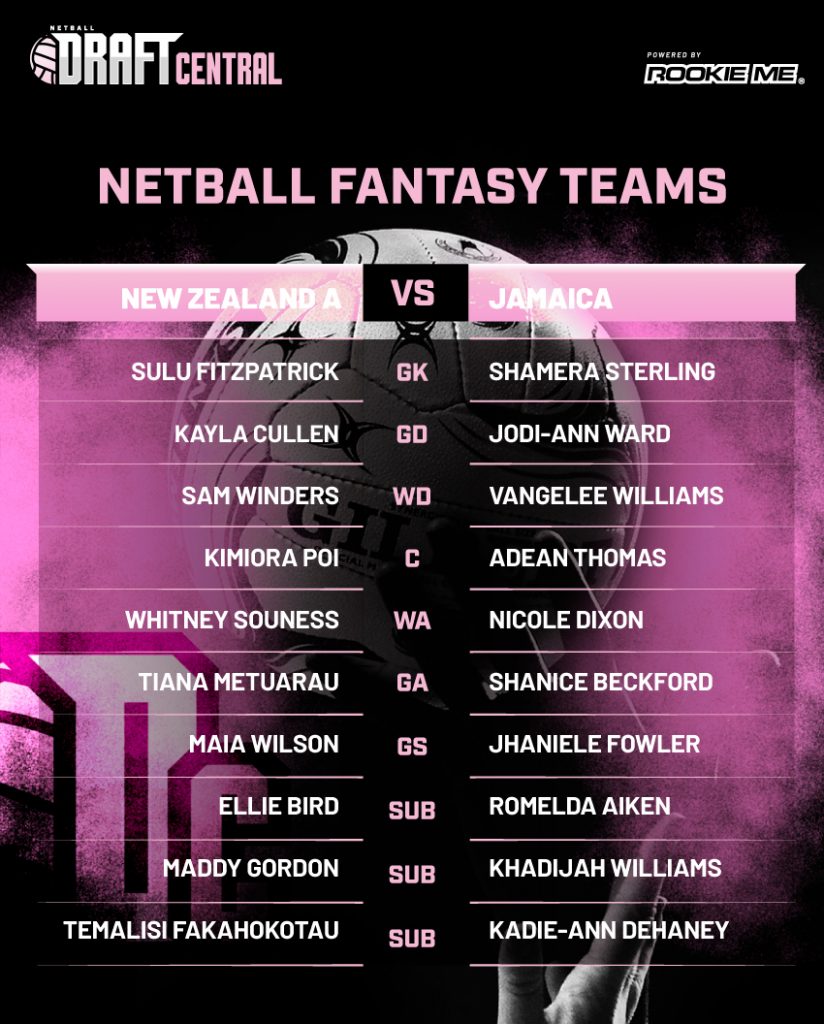 NEW Zealand have steadily developed the next tier of players over the past couple of years with coach Noeline Taurua taking a clear look to the future of the Silver Ferns as shown with the New Zealand A team. Pitted up against a developing yet strong Jamaican team the battle sees a variety of up and coming stars as well as some experienced and well-versed international players.

Starting in defence is Pulse premiership player and electrifying goal keeper Sulu Fitzpatrick. The defender is quick on her feet, can leap into action in a heartbeat given her impressive hops and is extremely dynamic both in the air and at ground level. Accompanying her is former Silver Fern and lanky defender Kayla Cullen who oozes nothing but class. She can ply her trade in goal defence, goal keeper or wing defence such is her netball understanding, versatility, strong movement and read of the play making life hard for opposition attackers.

The midcourt is littered with nimble and speedy players that are renowned for their ability to dart around the court and cause havoc. Wing defence, Sam Winders knows what it takes to play at the highest level having stepped out on court for the Ferns multiple times. Her defensive pressure, three-foot marking and ability to shadow attackers makes her a daunting prospect for many as she is constantly on the lookout for her next intercept or tip. Energiser bunny, Kimiora Poi gets the nod at centre with the 168cm nippy midcourter able to exploit every tiny bit of space and use her speed to burn off opponents. Her quick hands into the circle also allows her to catch defenders off guard and deliver pin point passes into the shooters. Partner in crime, Whitney Souness takes out the wing attack position. Although she plays a similar role to Poi given their speed and dynamic movement, her strength around the circle edge and general ball placement to feed into the circle makes her a promising prospect for New Zealand netball.

Looking into the goal circle there is no shortage of talent headlined by the likes of Northern Stars goaler in the ANZ Premiership, Maia Wilson. The 22-year-old has come along in leaps and bounds with her strong holds, and clever footwork, while her impressive rebounding ability, high volume of shorts and accuracy to post are just a couple of key components in her game play. Out in goal attack is Tiana Metuarau who much like her other teammates has developed at a rate of knots with her impressive timing along the baseline and skill with ball in hand. Metuarau has speed to burn, is confident in the attacking third and is not afraid to take the game on.

There is no denying that the Sunshine Girls are bookended with top tier talent, able to turn a game on its head in a matter of seconds. Down in defence, Shamera Sterling leads the way with the long-limbed defender able to get a hand in everything that comes her way. Her ability to read the play, take a screaming intercept and constantly reject the ball from entering the goal circle is second to none. Out in goal defence, Jodi-Ann Ward plays a less flashy role than her defensive counterpart but still has an undeniable influence with her quick footwork, strong hands over pressure and court coverage to force timely turnovers. Ward is also very versatile able to move into wing defence and goal keeper when needed, giving her that competitive edge.

The midcourt is quite dynamic with all three players possessing plenty of speed to run opponents off their feet. The defensive minded Vangelee Williams is constantly on the hunt for an intercept with the wing defence able to read the play effortlessly and drop into the holes across the court. She is strong around circle edge to create tips and block easy access into the attacking third. Moving into centre is Adean Thomas with the 173cm midcourter able to take the ball at full speed and stop on a dime credit to her control and balance. Thomas is an exciting player to watch, able to light up the court with her playmaking style, dynamic footwork and vision into the circle. Similarly, Nicole Dixon plays with plenty of attacking flair able to find her fair share of space around the circle edge and deliver the ball into the goalers. She is quick off the mark and hardly ever stands still, always looking to work the angles and be an option in the attacking third.

Goal attack Shanice Beckford has speed and skill to boot, able to get under the feet of opposition defenders and command the ball despite her small stature. She is not afraid to back herself under or away from the post and is a real playmaker for Jamaica. Standing tall in goal shooter is Jhaniele Fowler with the 198cm goaler a commanding presence under the post. Her strength in the air is almost unmatchable, constantly reeling down any high balls, and using her body to ward off any oncoming defenders. She is hardly ever fazed by the defensive pressure and puts up a high volume of goals at an even higher accuracy.

On the bench is fellow towering goaler Romelda Aiken, along with dynamic midcourter Khadijah Williams and the ever-reliable Kadie-Ann Dehaney.

Boasting a slightly stronger midcourt group the New Zealand A team have the upper hand in the middle third with the likes of Winders, Poi and Souness all strong options. While Jamaica ooze nothing but class in both the goal keeper and goal shooter positions thanks to Sterling and Fowler it comes down to whether or not the Sunshine Girls can get on top of Wilson and Fitzpatrick to really romp it home something they definitely have the capability to do. With speed to boot and an uncanny intercepting ability Jamaica have a clear upper hand when it comes to not only connections across the court but so too scoring prowess.