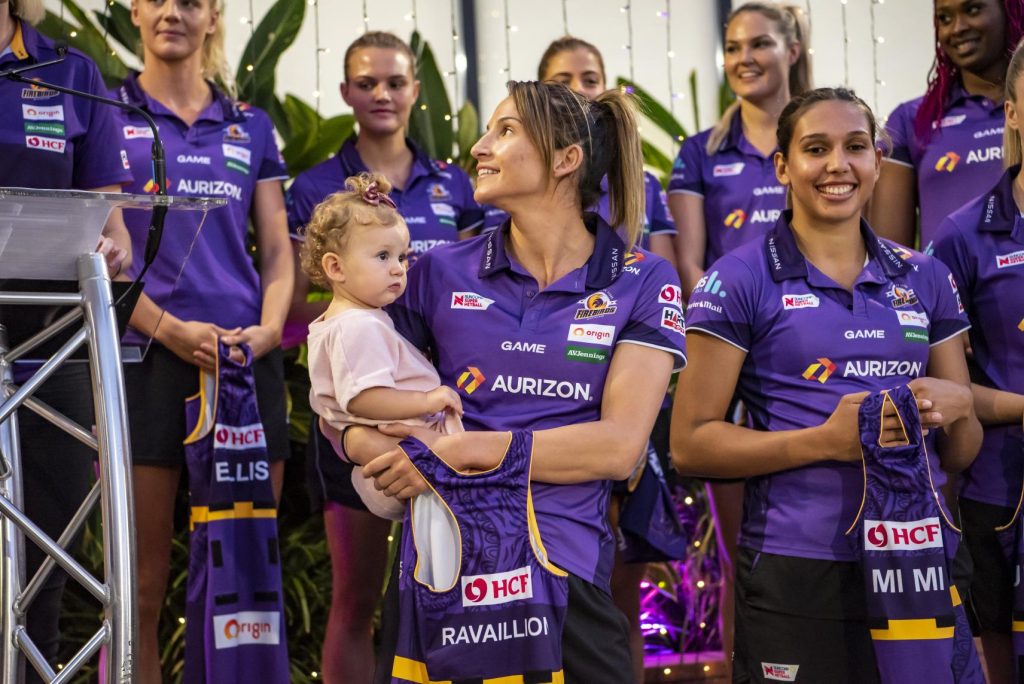 IT has been a homecoming of sorts for midcourt star Kim Ravaillion, with the highly talented midcourter returning to where it all began, signing with Queensland Firebirds for the 2021 season. A former premiership player with the Firebirds, Ravaillion will be hoping to replicate those highs once again this year.

“It definitely feels like I’m back at home with the purple family, so it’s going to feel really nice putting the purple dress on and playing out in front of the home crowd on Sunday,” Ravaillion said.

After giving birth last year to daughter Georgie, this will be Ravaillion’s first season back plying elite netball since 2019. The midcourter is raring to go, stating that she is stronger than ever – an ominous sign for rival teams.

“If anything, you’ve got more of a shield on you because you’re a mum and you don’t really care about yourself as much – you’re more looking after your little baby. I feel like I’ve got another layer of thick skin on me.”

A lot has changed since Ravaillion last took the court for the Firebirds, both in a playing sense and a physical sense. Instead of being that bright-eyed and bushy tailed developing prospect, Ravaillion is now one of the more experienced and senior names in the squad.

“(It’s) like the same but different in so many ways. The feeling is the same ,as in I love the club and the people and the feeling at the Firebirds, but I’ve come back as an older player,” Ravaillion explained. “I’m not that young player I was four years ago and, you know, when Laura Geitz and Clare McMeniman at the time were kind of looking after us.”

As a new mum and one of the more senior members within the side, given the number of young and developing players in the 10 player squad, Ravaillion has taken it upon herself to be a leader and encourage the players around her to follow in her footsteps.

“I find it quite easy, if anything I just kind of lead by example and go about my business. It’s not like I’m doing anything different. I think being a mum you’ve kind of got that nurturing side as well, you want to make sure everyone’s doing alright.”

“So it’s been easy, I don’t have to change anything. I just kind of lead by example is what my coach would tell me to do. I just go in and train really hard and hopefully the girls come along with me.”

The rigours of childbirth are no easy feat, let alone doing it from another state away from your loved ones. But the challenge is one that the Australian Diamond is more than capable of stepping up to.

“It’s so amazing, the female body and how it can go through all that trauma of giving birth and then it’s not bouncing back – I guess you have to do hard work before, whilst you’re pregnant and then the hard work after. It’s just amazing to see how I feel. My body’s stronger than what it was before I gave birth. So it’s been challenging to get back to full fitness, but I’m a competitor so I just love pushing myself to my limit, it’s been fun.”

The preseason games have also been crucial for the Firebirds’ squad development, coming together nicely ahead of Round 1.

“We’ve had a couple of practice matches and we’ve literally done everything we’ve worked on out of training, against opposition. Now it’s just trying to find that balance and really bring it to our opposition in the real game,” Ravaillion said.

I think we had a really big match against the Lightning last week and we’re kind of “alright, yep”, we all feel confident in our game plan and it’s just sticking to that game plan on Sunday.”

With new coach, Megan Anderson at the helm, the Firebirds have adopted a bit of a different style of play out on court, however Ravaillion was relatively coy in not revealing too many trade secrets.

“Well that’s a secret! I guess just playing with smarts. We want to start well, so that’s going to be our starting point. We just want to continue to get better each and every game and we just want to really focus on our defence and all of our structures, and making those combinations really strong, and hopefully getting stronger by the end of the season.”

The fancy-footed midcourter is not the only one returning from giving birth, with fellow star, Gretel Bueta also rejoining the squad. Balancing motherhood and a life as a professional athlete is no easy feat, however Ravaillion paid homage to the care and consideration from Anderson when it comes to looking after herself and Bueta upon their return.

“She’s awesome! I guess Megs kind of understands this more than anyone because she’s played the game at a professional level and she’s also got kids of her own. So, Megs has been so great in supporting both Gretel and I have in being mums with our kids, and, you know, if we’re tired one morning and we can’t put in 100 per cent, we just have to have that conversation with her and she’s very understanding.”

“You know, just take a break and come back and give us your full self,’ Ravaillian explained. “So Megs has been awesome and her approach to coaching is very calm and she doesn’t really show too much emotion, she just says it how it is, which is what we love and she’s been great so far.”

Anderson was not the only one Ravaillion credited for her return to elite netball, with the 27-year-old highlighting the influence her mother has had on enabling her to live out her dream as a netballer and mother.

“I’m very fortunate to have my own mum come and support me and look after my daughter. It probably would have been very difficult if I didn’t have her, being interstate away from my partner, so it takes a village as they say.

“It has its rewards and has disadvantages, it’s not all smooth sailing so we’ve just managed to get the balance right and mum’s been an amazing help for me in order to help me to continue to chase my dream, so I’m very lucky to have her.”

Ravaillion will join the likes of spearhead and captain Gabi Simpson in the midcourt along with up-and-coming youngsters Jemma Mi Mi and Lara Dunkley as the purple army endeavour to push ahead and build on their 2020 season.

“I’m loving it, loving the challenge and the girls both bring something very different, and it’s awesome being put on with Lara Dunkley and the way that she plays and having to adapt my game and vice versa when,Jemma Mi Mi comes on and how she plays.

“But it’s all about reading who you play with and working to their strengths and also mine.”

The Firebirds’ 2021 campaign commences on Sunday, when they take on the NSW Swifts at Nissan Arena at 1:00pm.