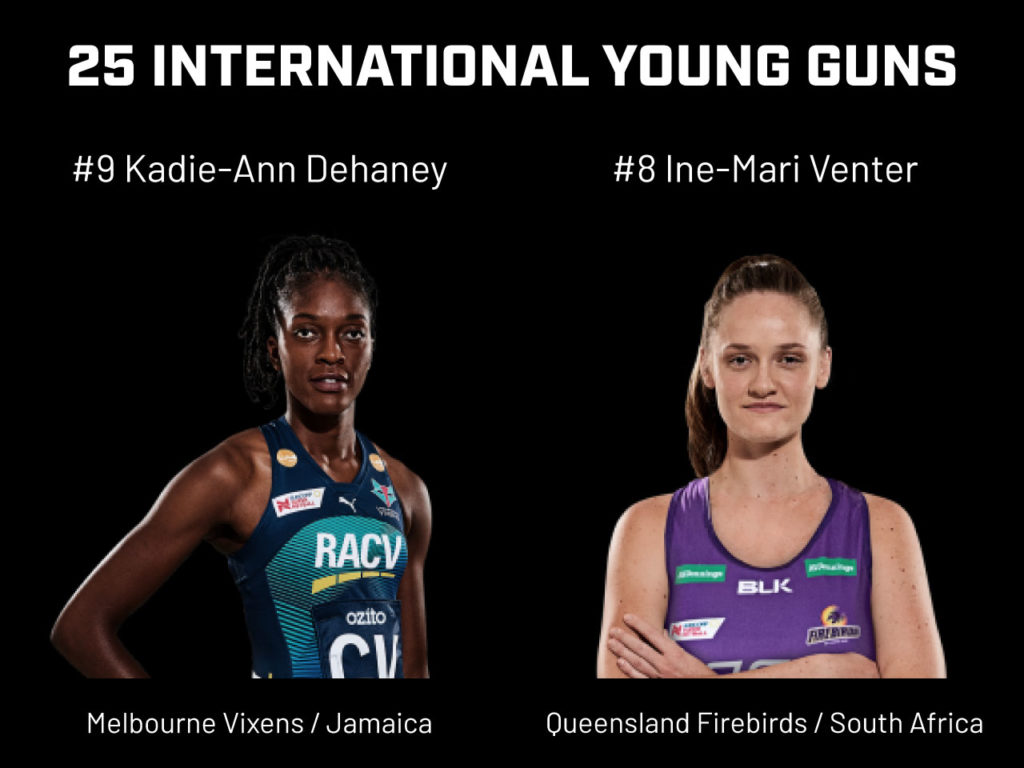 WITH a number of netball leagues across the world being suspended due to COVID-19, the Draft Central team is making a case for the top 25 players under 25-years-old across the netball world. Moving into the top 10 is a couple of former Melbourne Vixens teammates Kadie-Ann Dehaney and Ine-Mari Venter. With so much talent at our disposal, this countdown is purely opinion-based, taking into consideration recent form, individual potential and future development.

Coming in at nine is Kadie-Ann Dehaney with the Jamaican defender taking her game to another level in recent months. Dehaney has showcased that she can be an impact player able to burst onto the court and cause her havoc with her long limbs and ball winning skills. Her aerial presence is a key feature of her game able to get up to the high balls and create turnovers or take impressive intercepts. Although costly at times when it comes to penalties, Dehaney works hard to create pressure with her hands over pressure and quick feet to confuse the space. Her connection with both Emily Mannix and Jo Weston enables her to go out hunting for cross-court balls and stop the ball from coming into the circle. Although she does not record a lot of court time for the Vixens, she displays enough skill to earn herself a consistent spot in the Sunshine Girls line-up. Her ability to have an impact at an international level and ply her trade up against some of the worlds best netballers is credit to her high netball IQ and desire to have an impact on the court.

Much like Dehaney, Ine-Mari Venter has struggled to register court time in Suncorp Super Netball (SSN) but has shown that she has plenty to offer with her well-timed drives, strong hands and spatial awareness. Discovering a new position in 2019 pushed out to goal attack, Venter added another string to her bow. The typical goal shooter showcased her ability to feed the ball into the circle and transition the ball down the court throughout last season while also backing herself in the goal circle. Although she does not put up a wealth of shots, her accuracy and precise movement in the circle is what makes her such an exciting prospect both at SSN level but so too for the Spar Proteas. The 192cm shooter is a real threat to be reckoned with, thanks to her strong holds, nifty footwork and ability to change up her game style. Coming into the prime of her career at 25, Venter has learnt off some of the best such as Caitlin Thwaites at the Vixens and Lenize Potgieter at an international level and will want to make herself a permanent fixture in the Proteas starting line-up.