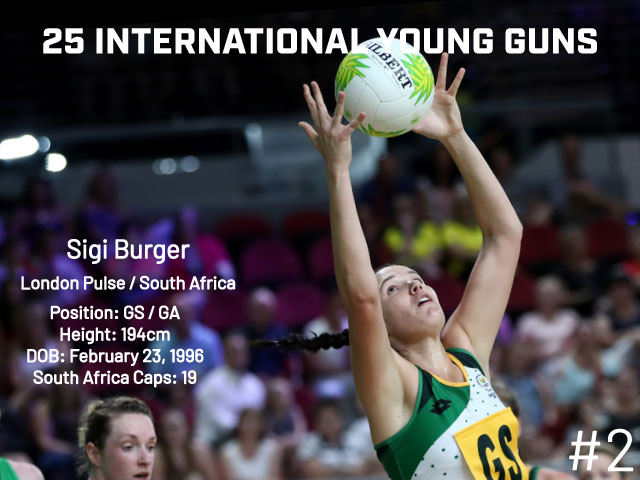 WITH a number of netball leagues across the world being suspended due to COVID-19, the Draft Central team is making a case for the top 25 players under 25-years-old across the netball world. Coming in at number two is South African and London Pulse shooting sensation Sigi Burger. With so much talent at our disposal, this countdown is purely opinion-based, taking into consideration recent form, individual potential and future development.

The South African product has class to boot able to turn a game on its head with her dominant shooting and commanding figure in the goal circle. Burger has proven time and time again that she is reliable under the post able to put up a wealth of shots and most importantly do so at a high accuracy. Since making the switch to the London Pulse in 2020 in the Vitality Superleague, Burger has not skipped a beat leading the way for her team with her clever positioning, strength on the take and netball nous. In her three games for the season, prior to the COVID-19 global pandemic, Burger managed a whopping 124 goals from 127 attempts at an average of 41 goals per game and a staggering at 98 per cent for the season highlighting her shooting prowess. She is strong on the take not often outmuscled by the likes of a-list defenders such as Eboni Usoro-Brown, Razia Quashie or Fran Williams consistently displaying her immense talent and smarts. Although she is still developing her connection with new teammates in Chiara Semple and Emma Thacker in goals along with Adean Thomas, Ashleigh Dekker and Michelle Drayne through the midcourt Burger has made herself a viable target with her strong holds. Her ability to read the play and drop back into the space or move her feet to reposition makes her an integral member in any team.

The 24-year-old has not spent a lot of time out on court for the Spar Proteas having only played 19 caps but has grown with confidence and stature each outing. Taking part in both the World Cup and Nations Cup, Burger has shown that she can hold her own out on court against some of the most dominant defenders but will want to make herself a more permanent member in the squad. The 194cm goal shooter often competes with the likes of teammate Lenize Potgieter and Ine-Mari Venter for the starting goal shooter bib but has shown that she can quite easily come on and have an impact thanks to her long arms and ability to reign in errant passes. Her timing in the circle is highly impressive while her quick hands to reposition under the post is another important element of her game play.