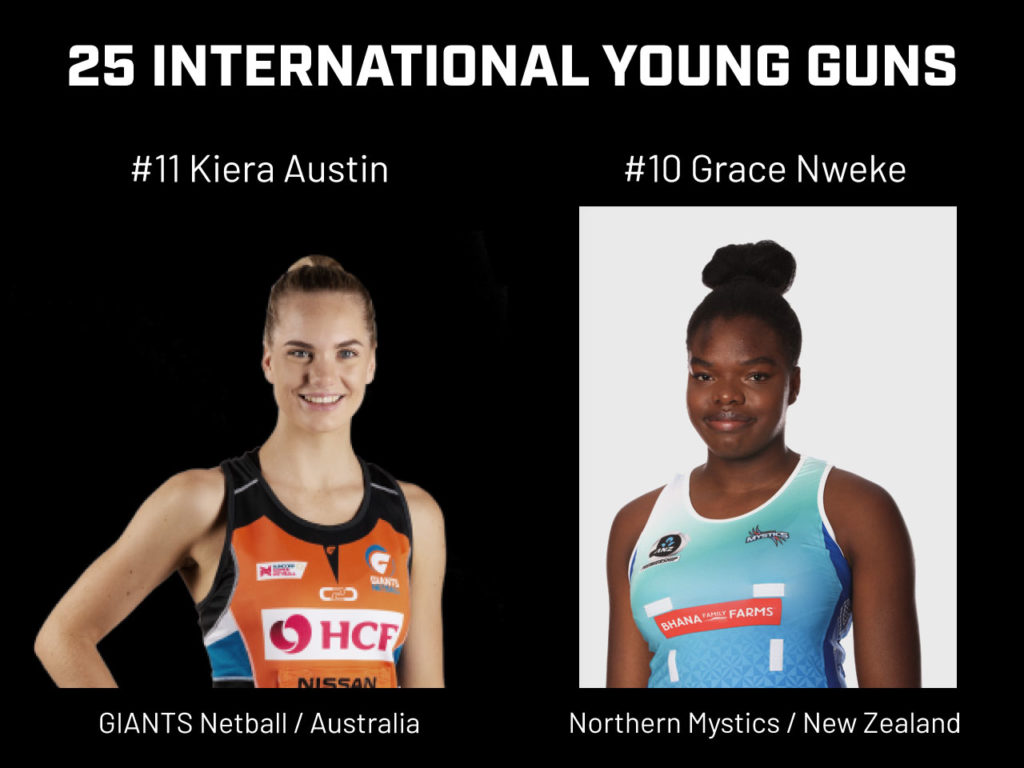 WITH a number of netball leagues across the world being suspended due to COVID-19, the Draft Central team is making a case for the top 25 players under 25-years-old across the netball world. Coming in at 11 is Kiera Austin while up and coming New Zealander Grace Nweke snuck into the top 10 after a dominant last season in the ANZ Premiership. With so much talent at our disposal, this countdown is purely opinion-based, taking into consideration recent form, individual potential and future development.

Just sitting outside the top 10 is Suncorp Super Netball (SSN) developing shooter, Kiera Austin. The 22-year-old shooter has a bright future ahead given her versatility and sheer netball nous. While she has struggled to get court time thanks to playing alongside the likes of Jo Harten and Caitlin Bassett at the GIANTS has shown that she can come on and have an impact whether it be in the goal circle or out the front in wing attack. Her clever ball placement, deceptive speed and traditional style of netball are a couple of key attributes in her game. She is a real confidence player and builds as the game goes on, able to draw on the vibe of the crowd and players around her. Austin has shown time and time again for the GIANTS that she can have a damaging impact around the circle edge with her well weighted passes and spatial awareness while also backing herself when under the post. Her quick footwork and desire to go to post makes her an exciting prospect and will want to put her best foot forward in the coming season to earn herself a spot in the Diamonds.

Northern Mystics goal shooter, Grace Nweke snagged 10th place on the countdown given her breakout season in 2019. Nweke took the competition by storm and at the mere age of 18 is one of the most exciting talents to watch. She is simply unstoppable under the post with her ball control and unbelievable aerial ability. Not often overawed by the a-list defenders in the ANZ Premiership such as Kelly Jury, Katrina Rore, Karin Burger or Jane Watson, Nweke has shown that she can hold her own and most importantly backs herself. Her high volume and accuracy puts her in a league of her own able to single handily keep her side in the game or turn the tables with her skill to score quickly and big split. Playing alongside Silver Ferns goaler, Bailey Mes, Nweke has been able to further her develop her repertoire. Already apart of the Ferns development squad the youngster will be hoping to make a real name for herself this season in what is meant to be her first full season at the highest national level and hopefully secure a spot in the team. She is composed under pressure, able to think her way through zone defence and is strong on the hold to reel in any passes that come her way.