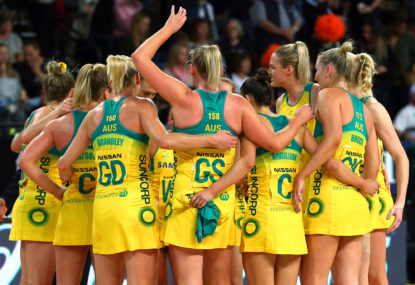 THE Australian Diamonds have thrown their support behind the Australian bushfire relief, and are set to play a fundraiser showcase match against an all-star Suncorp Super Netball (SSN) team at Qudos Bank Arena on Sunday, March 1. The game will pit some of the best international players in the SSN against the Diamonds in what will be a tantalising battle of skill and smarts in hope to raise funds for bushfire relief.

Expect the usuals to get the start for the Diamonds with the likes of captain Caitlin Bassett to don the goal shooter bib while shooting sensation Gretel Tippett is more than likely to get the start in goal attack. There are plenty of options through the midcourt with Paige Hadley and Liz Watson able to switch into wing attack or centre with Ash Brazill and Jamie-Lee Price have proven to be a force in both wing defence and centre. Defensively the duo of Courtney Bruce and Jo Weston are formidable with the two consistently posing a threat with their hands over pressure, hunt for the ball and tenacity.

There is a wealth of influential players across the SSN that could have a lasting impact and should be considered for the all-stars team making the decision extremely difficult to make. Unlucky to not make the cut is the likes of Sam Wallace who has been a key contributor in the past couple of years for the Swifts along with the likes of Phumza Maweni down in defence.

It is hard to go past Jamaican power house Fowler with the towering goaler able to single handedly dominate the opposition with her commanding height and deceptive aerial ability. Fowler added another string to her bow in 2019 getting on the move more regularly to shake up her game style. Although she is most comfortable directly under the post, Fowler can go to post from mid-range making her a sure start for the up-coming all-stars game.

The talented goal attack has class to boot seamlessly moving across the court and using her signature drives to open up space. She is cool, calm and collected able to read the play with ease and stand up under pressure as she has proven multiple times. Housby can shoot from anywhere in the circle and is a real playmaker in the attacking half with her vision and pin point passes a key component of her game play.

Haythornthwaite is one of the most consistent wing attacks in SSN and although she is not the fastest player on the court it is her smarts, ball placement and connections that makes her so deadly. The Roses representative gives 110 per cent each time she steps out on the court, pair that with her strong drives to the top of the circle and quick hands to flick the ball around the circle edge, she makes for a pretty handy inclusion in the potential all-stars team.

Hands down one of the world’s best centre making her all but a shoe in for the all-stars team. Langman is an energiser bunny able to run all day and night, consistently dictating the play across the court with her smarts and ball placement. She is renowned for making something out of nothing along with her defensive flair. There is nothing she cannot do, able to pick off passes, force turnovers and deliver precision balls into the goal circle.

The experienced and skilful wing defence has a plethora of knowledge when it comes to combating her fellow Diamonds competitors having played with majority of them making her an asset to the all-stars squad. She is a defensive mastermind frequently using her impressive speed and high vertical leap to full advantage to pluck balls out of mid-air. Her ability to shadow opponents and block their every move is a key element of her game while her drive through the midcourt also provides that attacking aspect to any side she is in.

Arguably the best goal defence in the world making her an easy candidate for the all-stars team given her defensive prowess, go-go gadget arms and speed off the mark. She consistently causes headaches for any opposition attack end with her persistent tagging style of defence and nous to cause deflections and turnovers. Pretorius is renowned for her ability to pick-pocket opponents and send the ball flying back down the other end of the court while her lean over the shot is just as intimidating.

Collingwood and Roses goal keeper, Mentor makes for a handy inclusion given her experience, commanding stature and defensive skillset. Mentor is strong in the air able to read the play with ease and use her body to position under the post and gobble up any rebounds. She can confuse space in the goal circle with her quick feet paired with her three-foot marking Mentor is a tough opponent to match-up against.

All three players offer skill and match-winning ability making them all viable options for the starting seven. Sterling while still young and developing her craft is explosive able to hunt the ball and grasp an intercept mid-air thanks to her incredible leap. Thunderbirds teammate, Pitman also offers great consistency and durability able to think her way through tricky situations and deliver well weighted passes. Meanwhile GIANTS goaler, Harten is all class with ball in hand, happy to turn and shoot from anywhere within the circle.