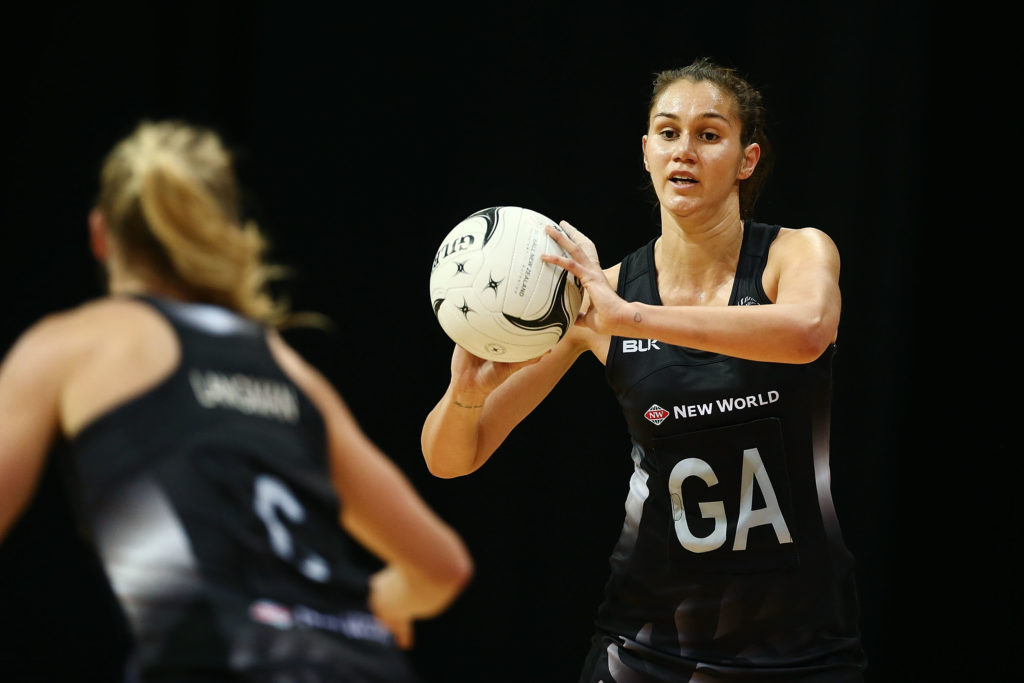 ONCE making her move from Australia to New Zealand it all happened very quickly for Ameliaranne Ekenasio, getting the call up to play for the Silver Ferns before even moving to the country. Given her Ngapuhi heritage, the talented goaler was eligible for Ferns selection and made an immediate impact on the team which relished her pace, accuracy and excellent vision.

“Honestly I think my favourite netball moment would have to be getting my debut for the Silver Ferns,” Ekenasio said. “Because honestly it was the most unexpected thing ever and it happened so quick and I just had to go with it!”

Since debuting for the Ferns in 2014 against Australia in the Constellation Cup, Ekenasio has played 25 caps at the international level.

“There’s really nothing that compares to it,” she said. “It’s so special and can be so overwhelming, like emotional as well.”

Pulling on the black dress for the Ferns means more than just playing netball for Ekenasio, with the honour of it representing the entire country, past and present.

“It’s like almost when we put our dresses on we almost embody the strength of all the women who have come before, all the ones who look up to us,” Ekenasio said. “So when you start to think about it like that it can become quite emotional, because you just think of how good you really, really want to do and how proud you want to make everyone because you’re wearing it. “We have so much passion behind it but we need it to be controlled too so we can play the game like we want to play it, so yeah, there’s really nothing that compares to representing our country, it’s the biggest honour.”

In recent times, the Ferns have struggled, but with the introduction of two-time premiership coach with the Sunshine Coast Lightning, Noeline Taurua, Ekenasio believes that the Ferns have found a new passion and drive.

“I’d never had Noels before, but now that I have, man I love what she does. Her impact on the team has been immediate,” she said. “She’s so powerful so when she talks, we listen like she’s never spoken before, so it’s so cool to be in such an empowering environment because that’s what she creates.”

While Ekenasio enjoys her time out on the netball court surrounded by her teammates, her home life is just as important. The new mum put netball on hold to have her child and while her comeback has been important to the Ferns she struggled at first to find that happy medium.

“It was tricky, it was really, really tricky,” Ekenasio said. “I think as athletes we put so much pressure on ourselves to perform all the time, and I was definitely in a really deep space, a new baby, a new mum, I was learning so much about that and then coming back to netball was also new as well. “It was really frustrating because I wanted to be back where I was straight away but it took a while.”

Following the birth of her child and the Ferns’ busy international schedule, the star shooter slotted straight back into the New Zealand side, albeit with minimal confidence and match fitness under her belt.

“Yeah that was really hard and I found confidence a really big thing because everything changes so much when you have a baby that it’s hard to just switch back into athlete mode when you’re a mum as well,” she said. “I kind of just went in flat out, I didn’t really have a chance to kind of get back on court and feel good before I got to go back and play internationally, so that was a really big wakeup call for me.”

While her spot in the international side was solidified, her absence at the Pulse had created a vacancy for other players to take her spot, forcing the shooter to the bench.

“I think coming back to Pulse, I had lost my starting position, and it took me the entire season to earn it back so that was quite tricky,” Ekenasio said. “It was a newer space for me to be in, because I was a Silver Fern coming back into it but I was sitting on the bench most of the season so yeah it was a huge thing of growth for me.”

Ekenasio was faced with many challenges throughout her netball career, but the Ferns goaler pushed through to become one of the most formidable shooters. She is known for her lovely shots, silky movement across the court and desire to constantly improve and with the World Cup coming up in July there is plenty of hard work ahead for the New Zealand camp.

“We’ve been grinding away and making changes is hard as well, the big changes we’ve had to make are really hard to make, it’s been quite taxing, mentally, physically,” Ekenasio said. “We’re all trying to move forward, but now that we feel like we’re actually moving it’s such a cool feeling.”

Given the high expectations to perform on the world stage it is important that the Ferns continue to develop and train even when they are outside of the group with Ekenasio stressing the importance of self-motivation.

“I think it really comes down to a lot of self-discipline, because when you’re in a Ferns environment even though it’s not the same thing as when we’re out of it, that’s when it’s hardest,” Ekenasio said.

Now her attention turns to the World Cup which is less than 100 days away, with New Zealand heading to England in July to face the best netballers across the world.