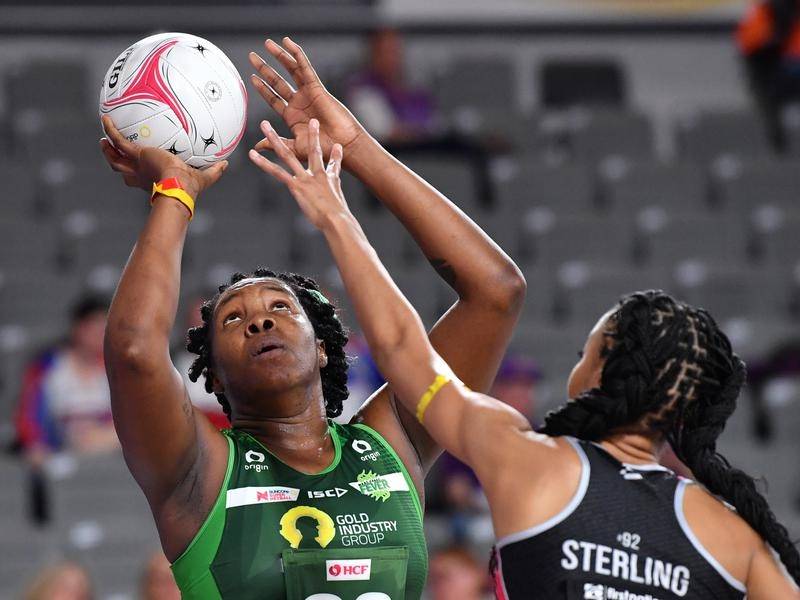 BOTH the West Coast Fever and Adelaide Thunderbirds came out flying in their first battle for the 2020 Suncorp Super Netball (SSN) season, with the Fever’s constant pressure down court paying off for an excellent 12-goal win to start the season on the ultimate high.

The timing from Shamera Sterling was impressive from the get-go, holding Jhaniele Fowler with ease and seeing an early lead extended by the Thunderbirds. But some calmer ball movement from the Fever saw the away side settle better as the quarter went on, limiting ease of access to the ball for the Thunderbirds. Getting a few goals up took a bit of patience, but the Fever took it in their stride and took advantage of hurried ball movement down court. It took some time for both teams to work into the game, with errant passes flying but some good ball movement happening for both sides.

Caught unmoving a couple times, young talent Sam Gooden was held well by Stacey Francis early on but gained in confidence, with the Fever defence limiting movement and forcing the ball to go to a well held Lenize Potgieter at the post. Courtney Bruce may not have kept Potgieter quiet, but her hands over pressure on Gooden proved influential. With a mostly even first quarter behind them, the first five-minute super shot period started with a bang thanks to Fowler shooting the first long bomb of the day, with the tall timber opening her bag of tricks and shooting at full accuracy early. Meanwhile, the Thunderbirds were unwilling to go long. The Fever had all the first quarter momentum after a slow start, leading 18-13 at the first change.

A couple of good ball wins from Jess Anstiss allowed the Fever to continue their control in the second, with the young gun providing a constant buffer at the first phase to turn over possession. Continuous confusion of the space by Bruce paid dividends, while the ball movement of Ingrid Colyer and Alice Teague-Neeld saw plenty of crucial ball going straight into Fowler at the post. Teague-Neeld’s improved confidence and intensity was mirrored by the evident development of young Adelaide midcourter Maisie Nankivell, who generated some great ball back in wing defence in the second quarter to keep the Thunderbirds in it.

Charlee Hodges entered the court midway through the term to open up a bit more attacking movement for the Thunderbirds, though less than a minute later Sterling went down with an unsuspecting ankle injury to put a damper on the quarter as Kate Shimmin joined the fray. The height mismatch was clear from the get-go, opening up the long high ball to Fowler at the post, though fortunately Sterling was back not long after, yet not at her typical excitement-boosting form.

The physical matchup saw the two sides taking plenty of risks, with everything on the line and a couple of late challenges seeing plenty of players hit the floor. A couple of debutants took to the court credit to the rolling sub rule, with Georgie Horjus having an impact both on and off the ball in goal attack for the Thunderbirds, showing a good connection with Potgieter and unafraid of the contest. But the Tbirds went into the second half down by a hefty margin, not taking many long bombs and seeing the scoreline extend to 11, 38-27.

The second half started much the same, though the Thunderbirds grabbed a couple great opportunities to pull back to under 10 goals. Defensively, the Thunderbirds were not doing enough outside the circle to stop the ball from getting into Fowler but stayed in the game with Potgieter’s accuracy well and truly paying off and Gooden having an impact on the scoresheet with her long bomb accuracy. A lack of backup down the court saw nothing go the Thunderbirds’ way though, with the Fever maintaining much of the possession and continuing to dominate the contest.

Young talent Sunday Aryang was quick to have an impact out in goal defence, using her long arms to deflect the ball and plying her trade well on the equally inexperienced Horjus and winning much of the outer circle battle. A couple super shots in a row for the Thunderbirds saw the lead reduce, though the defensive pressure from the Fever continued to mount to force errors. Scrappy physicality saw players from both sides hit the floor in the late stages of the third as the intensity lifted.

Down by just eight goals coming into the final quarter, a quick start from the Thunderbirds was required. While the attack of the Tbirds was on point, defensively they could not cope with the Fever’s confidence in Fowler. With just over six on the clock the Fever had once again extended their lead taking it out to 12 and the Thunderbirds needed to put up every single super shot opportunity offered to them in the final five minutes to narrow the margin. A couple impressive long bombs from Teague-Neeld and Gooden saw the young talent step up, but with the two going toe-to-toe the Thunderbirds were unable to pull back the margin. Fever ran away with an impressive 12-goal win (74-62) credit to a consistent effort across all four quarters, with a Fowler super shot sealing the deal.

Among the top performers were Potgieter (35 goals from 37 attempts, one super shot) with Gooden the main super shot contributor with nine from 10 while Fowler sunk 53 of a possible 57, sinking three super shots while Teague-Neeld was solid with 10 from 15 (four super shots). Eight Fever players racked up at least one gain showcasing the full court defence, with Bruce’s six a testament to her read of the play, while Colyer was second in line with three – all intercepts. Sterling’s four intercepts proved she would not slow down a bit despite her ankle niggle, while both Shadine van der Merwe and Nankivell racked up two intercepts apiece. On the assist, Teague-Neeld and Verity Charles led the way with 19 apiece.