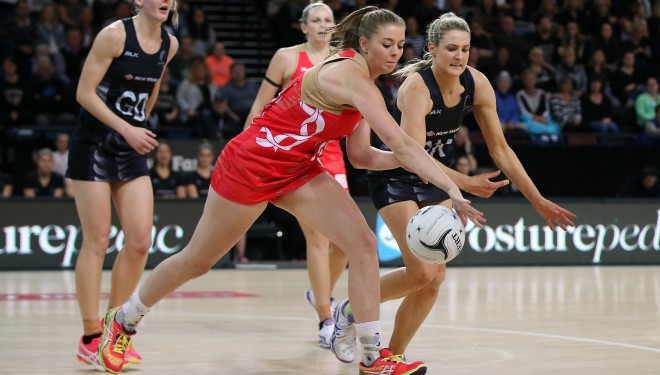 THE next instalment in the Draft Central Compare the Pair series will aim to analyse two fan favourites from across the netball world, with the next showcasing England Roses goal shooters, Rachel Dunn and Ellie Cardwell.

With so many talented goalers at the Roses’ disposal, two of the more under-recognised goalers are Dunn and Cardwell who have been consistent to a tee but not necessarily received the game time in recent years. While the pair have entirely different play styles – Cardwell typically playing a holding role while Dunn takes a moving circle approach – they can both have that immediate impact with a shared ability to turn and shoot with ease. Both are crucial goalers for their respective teams in the Vitality Netball Superleague, with Cardwell’s Manchester Thunder reigning supreme over Dunn’s Wasps Netball in the 2019 grand final.

A veteran of the Roses, 37-year-old Dunn debuted in 2004 and despite only being part of the Roses camp part-time, she is one of those players who can make a big difference in a short amount of time with her silky movement and clean hands. Despite her smaller frame, Dunn can line up against the best of them, able to use her quick footwork to evade her defenders and edge closer to the goals. Dunn was a key part of the Roses outfit which defeated Australia in the Quad Series match, cementing the goaler as a threatening option to come in and turn a game on its head with ease, and proving that the Roses have much more depth through their squad than many initially expected.

Cardwell’s clean hands and ability to rebound are what make her such a threat in the circle, and while she is relatively unassuming to post her cleanliness and speed put her at a real advantage. Her ability to share the goaling load and switch up her game depending on her fellow goaler is testament to her vision of the play while her clean footwork allows her to work her way around defenders with ease to find the goals with ease and post a hefty total. Cardwell’s can-do attitude and willingness to do whatever is required for her team has proven critical over the years, always up for a challenge and at 25-years-old has plenty left in the tank to continue with the Roses and gain precious court time.

Which England Roses shooter would you pick?
Created with Quiz Maker