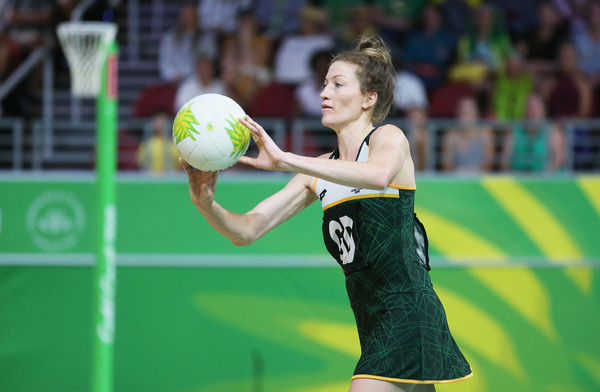 THE next instalment in the Draft Central Compare the Pair series will aim to analyse two fan favourites from different eras across the netball world, with the next showcasing goal defenders, ex-Australian Diamonds captain Kathryn Harby-Williams and South African superstar, Karla Pretorius.

Two significant names in the netball community, Harby-Williams and Pretorius are formidable defenders with unsuspecting speed, resilience and tenacity with a constant drive to turn over the ball. While neither player is, or was the tallest defender of the bunch, both make up for it with their clean hands and aerial ability, finding the loose ball and creating something out of nothing with unquestionable netball nous. With constant pressing defence and versatility to adapt to the play at hand, both players are well deserving of their accolades.

Tenacious Australian Netball Hall of Famer, Harby-Williams was a threatening defender who was a consistent name for the Diamonds thanks to her ability to create that game-changing turnover and provide a crucial link out of defence. With intensity, speed and an ability to create opportunities down court for her teammates, Harby-Williams was a constant threat in goal defence.

A formidable ex-Diamonds captain, Harby-Williams was unafraid of the whistle, using her bodywork to interfere with clean play to be a constant thorn in the side of any attacker, though that was rivaled by her bounds of experience to exploit holes in game plans and use her leadership to drive home wins. A stellar defender who applied constant and consistent pressure on her opposition, Harby-Williams could never be counted out of a contest thanks to her willingness to enter the fray and propel the ball back up the court.

Arguably the most explosive, dominant and exciting goal defence in the world right now, Pretorius is full to the brim with talent thanks to her impressive elevation, using her aerial ability to pick ball out of the air and turn it over. Pretorius’ skill is such that she makes it look easy, finding the loose ball with ease and picking her battles to stay clean and consistent.

Unafraid of the contest, the threatening defender is a key cog in defence for both the South Africa SPAR Proteas and Sunshine Coast Lightning, plying her trade again and again and shutting down attacking forays. With a strong build and quick feet to be that impact defender intercepting left, right and centre, it is rare that Pretorius is off her game, proving to be a quality defender who can take on almost any opposition and show them up with her dominant approach to the game.

Which legendary goal defence of two eras would you pick?
Created with Quiz Maker