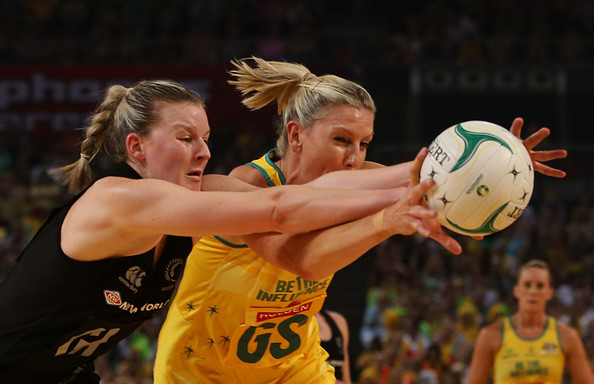 Arguably two of the most dominant goal shooters of the modern era, both Cath Cox and Caitlin Thwaites have formed dominant options to post for the Diamonds. Both champions in their own right, Cox and Thwaites may have different shooting actions and playing styles but certainly both gave the Aussies a valuable advantage in the goal circle with their respective consistency and accuracy to post. Both standing at 188cm, the two goalers were able to change up their game at the drop of a hat and both showed immense improvement throughout their time at the  top level. Off the international stage, both players provided crucial linkups for the NSW Swifts and Melbourne Vixens at different stages in their respective careers, with Thwaites still currently suiting up for the Vixens in 2020.

Cox spent 16 years in the Australian squad, with the veteran shooter debuting in 1997 and retiring from the green and gold in 2014. Cox was an agile goal shooter throughout her time on the international stage, and while she was not the tallest, she still provided a crucial target at the post with her ability to free herself from her defender with her quick feet and speed off the mark. Her footwork and split created a formidable pairing with the shooter able to find the goals with ease, while her clean hands and impeccable timing allowed her to create impressive plays. She earned her 100th test cap in 2012 – by which time Thwaites was also a member of the squad – and reached 108 caps by the time she retired in early 2014, becoming the third most capped player in Australian netball history behind Liz Ellis (122) and Sharelle McMahon (118) and overtaking fellow goal shooter Vicki Wilson (104).

While Thwaites may not have reached as many caps as Cox with 55 to her name, it was her deadly accuracy, movement and ability to shoot from anywhere in the circle that made her such a threat in goals for the Diamonds. Thwaites played second fiddle to Caitlin Bassett for much of her international career but still managed to slot into the side and have an impact when required thanks to her ability to change up the attacking third entirely. Thwaites has proved again and again an ability to thwart defenders with her agility and willingness to take on the contest, with her physicality and stellar split giving defenders a tough time going about their business and denying Thwaites at the post. Thwaites’ eight years in the Australian squad may be dwarfed by Cox’s 16 in comparison, but she had arguably just as much of an impact on the game and was a real fan-favourite for the Diamonds.