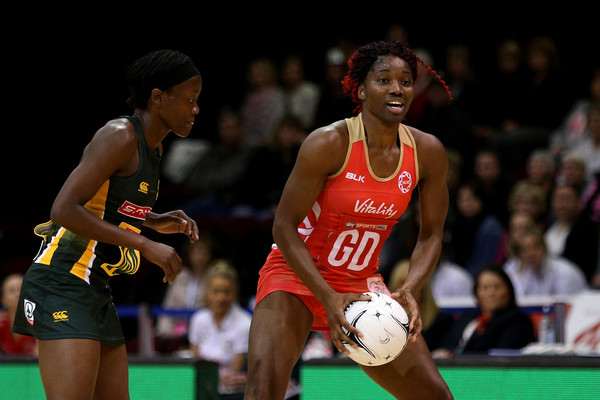 THE next instalment of Draft Central‘s Compare the Pair series will aim to analyse two fan favourites from across the netball world, with the first showcasing English defenders, Ama Agbeze and Razia Quashie.

Both defenders play in the Vitality Netball Superleague (VNSL) with Abgeze donning the goal keeper bib for the Severn Stars and Quashie pulling on the dress for the Saracens Mavericks. While they share the same position on the court their styles in defence are vastly different with a plethora of tactics and attributes separating them and ultimately helping to mould their respective game styles. Although Agbeze is in the latter stages of her netball journey at age 37, Quashie is at the other end of the spectrum. At 22-years-old Quashie has her entire career ahead of her and is making a strong case to be the next in line for a permanent position in the Roses line-up. While the duo are different in the way they approach the game, there are still a multitude of things they have in common, namely the constant drive to go one better than before and consistency – not to mention, they both stand at six foot tall and are able to challenge over the shot.

Former captain of the England Roses, Agbeze may not be part of the playing group anymore but has not entirely retired from international duties, leaving a small chance for the tenacious defender to return to the fray. With a decorated career behind her, Agbeze has collected more than 100 caps for the Roses and played in competitions across the world, making her name known across the world for her ability to impact the play and create something out of nothing. With impressive timing and footwork to boot, Agbeze has been a key cog as a shut-down defender throughout her career, always one step ahead of her opposition and able to find plenty of the loose ball. She uses her experience well to guide teammates on the court, while her knowledge of the game enables her to take back valuable ball.

Where Agbeze is at the tail end of her career, Quashie is still a newbie to the international scene at 22 but has herself in the right place for a future in netball, having collected the 11 caps since her international debut in 2018. She has an innate ability to create turnover opportunities and has a real drive to continue her improvement to hit her strides on the international scene. With intensity, timing and a constant work rate, Quashie can burst out of the goal circle for a critical intercept but also has the game smarts to hold back if need be, able to play that shutdown role when required making her a difficult player to anticipate in the heat of the game. Her timing to find the netball is impressive for her age, while her physicality on court sets her in good stead for future international campaigns given the constant push and shove to claim prime position in the goal circle.
__

Which goalkeeper would you pick?
Created with Quiz Maker