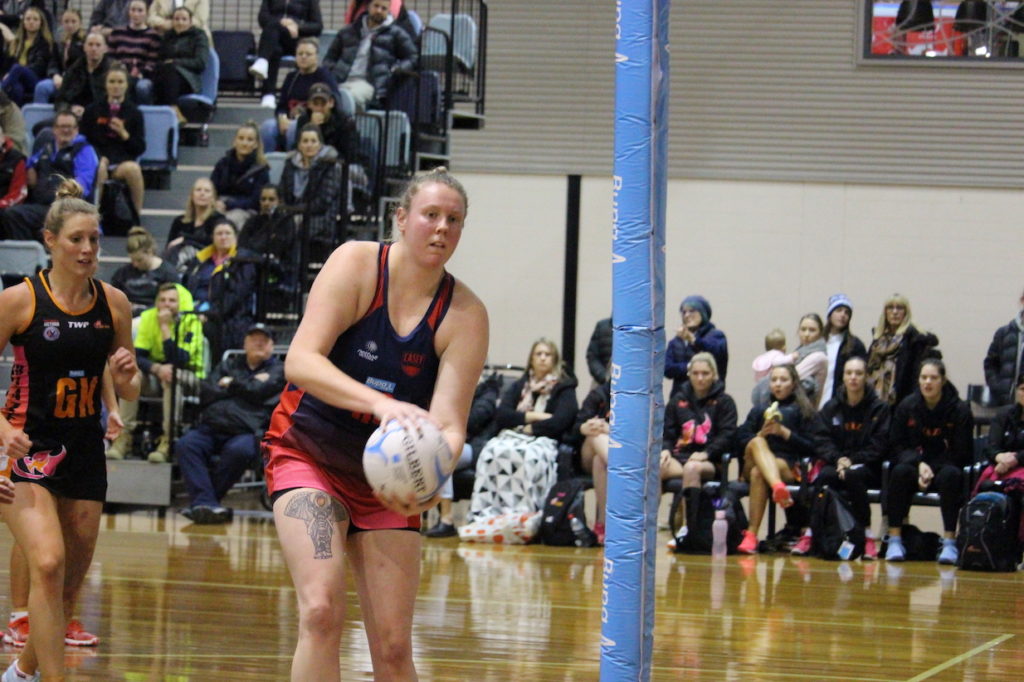 IN their inaugural season the Casey Demons have stormed into the grand final, well and truly announcing themselves as fierce competitors. Goal shooter Emma Ryde has been a key member in that charge, using her height and wingspan to her side’s full advantage.

“I think we are a bit of the underdog, I don’t think anyone expected us to make the grand final so we are just going with the ride,” she said.

The Demons overpowered North-East Blaze in the preliminary final with a convincing 16 goal victory and continued their hot streak to knock out minor premiers, City West Falcons by nine goals, edging themselves closer to their first premiership in their inaugural year.

The Demons are littered with a wealth of key players across the court with former Australian Diamond Erin Bell donning the goal attack bib and pairing well with Ryde in the circle. The two have formed a formidable duo in goals, finding good space and imposing themselves on the contest time and time again.

“I didn’t think that I would ever even get the chance to play with Erin so this year has been awesome learning from her,” Ryde said. “Obviously she (Erin Bell) played for the Diamonds and she has played Suncorp Super Netball. “So she’s an amazing player and I don’t think that I’ve played with a more confident player or goal attack so it’s been really awesome to get to know her as a person but also as a player.”

Ryde has been a key cog in attack for the newly formed Demons side, posting a whopping 1088 goals from 1099 attempts at 99 per cent, highlighting her ability to tear games apart with her accuracy and volume. But more importantly she has relished the opportunity to ply her trade at a new club.

“It’s been awesome. I absolutely love the club and I’m so, so, so glad I made the move to Casey,” Ryde said. “The people behind the scenes are just the best and most genuine people that I have ever met and that they really are entirely there for the right reasons. “They are there for the good of the club so it’s probably been the ideal environment that I needed to put myself into and it’s been really great.”

Throughout the season the Demons have gelled and formed a strong cohesive side despite their unpredictable nature.

“Definitely our strength is that we are very unpredictable, as I said this is our first year together,” Ryde said. “No one really knows us all together and we’ve got all different types of girls in our team so it’s really good that we can bring our bench onto the court and they will bring something different to the team so that’s exciting.”

But each side has a weakness, with Ryde pointing to the Demons’ win-loss ratio and inability to work through a zone defence as a concern for her side heading into the big clash on Wednesday.

“I guess our weakness must be that we’ve lost to Geelong both times that we have played them,” Ryde said. “They are quite good at the zone, that’s their type of defence so we need to work our way through a zone. But I think the Falcons did that to us last week and I think we played quite well doing that. “I think we can only improve and get better through the zones so I think Wednesday will be a good opportunity to see us grow through that weakness.”

With all of the excitement heading into the grand final it is easy to get carried away, but Ryde said that the Demons will carry on business as usual despite not being the favourites to take home the main prize.

“I’m trying to keep everything quite similar other than having to get off a plane last night so that’s been quite different for me in the last couple of weeks,” Ryde said. I’ll go about my week normally, go to the gym Wednesday during the day do a light session there and then head to the game. So no, I wouldn’t say I’m too superstitious but I’m going to try and keep a routine throughout the week.”

Heading into the grand final the Demons are aware of what they need to do to get over the line against Geelong given their ability to score quickly and force turnovers.

“We lost our last two matches to Geelong so we will just look at that and then just focus more on us and know that when we play our best netball obviously we have made it all the way here, and we think that we can win,” Ryde said.

Though the side may be inexperienced as a unit they have shown that they have the skill and belief to overcome threats in the competition, while the likes of Bell and Ryde can help to steer the ship and guide their team to victory.

“I think that we are really looking forward to the opportunity in our first season with the Casey Demons to play in a grand final so it’s exciting.”