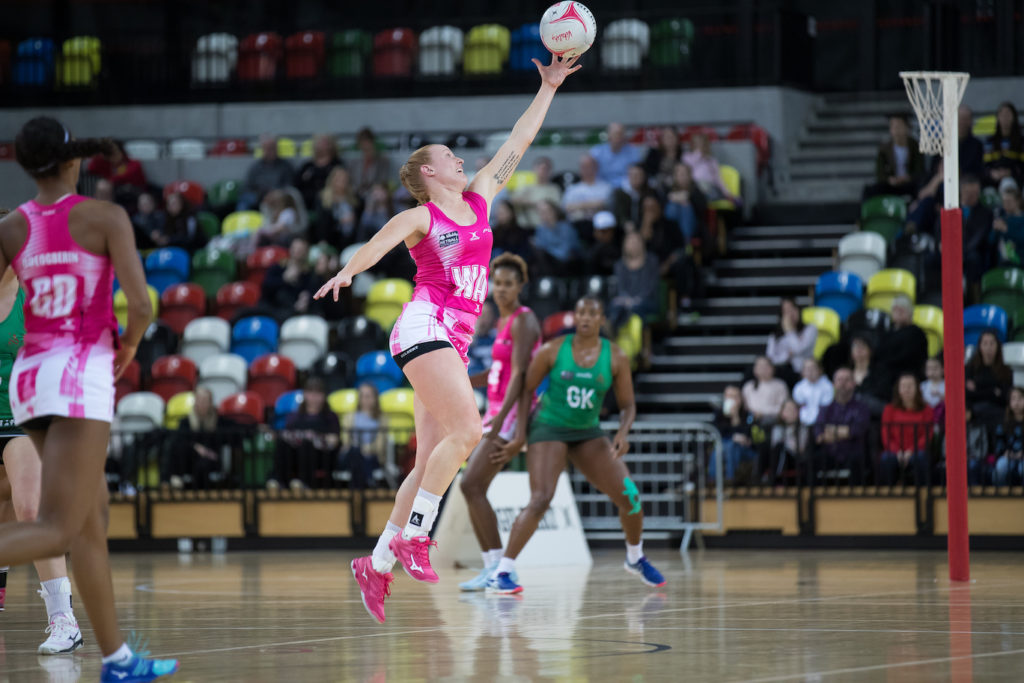 Australian-born attacker Ash Neal is not one to shy away from competition.

From a young age Neal was surrounded by netball with her love for the sport stemming from her mother who was an umpire and older sister Kyra Jones (nee Neal). Neal followed her sister, through the Australian netball pathway before heading across the pond to the UK. The highly decorated midcourter has won her fair share of awards including the ’Player’s Player Award’, ‘Player of the Year’ and ‘Jill McIntosh’ (umpire’s award) in 2014.

“Someone winning all three awards has never been done before and still hasn’t been repeated four years later,” said Neal. “That year we won the Grand Final and I also received MVP for that game.”

Neal debuted in the Vitality Netball Superleague in 2013, picked up by Surrey Storm from the West Coast Fever after coming through the ranks in Australia. Neal has played on and off throughout the past six years in the UK, adding up to two and a half years on the court proving her durability and love for the sport.

The Australian-born attacker has joined forces with London Pulse in season 2019. Neal has taken the court week in and week out thus far, proving her necessity for the side’s continued push to break into the competition, and is paving the way for young Australians looking for netball opportunities elsewhere.

The centre court player has a very methodical style of play, delivering the ball with great poise and structure which has transferred into her gameday rituals.

“I always have a big breakfast … I will chill out most of the day until about an hour before I have to leave, and that’s when I have a shower and start to get ready for the game,” Neal says. “I also have about a 30 minute nap before I start getting ready.”

The Australian has dual citizenship, meaning she has the ability to play in the Vitality Netball Superleague without the constraint of being classified as an “import”. At 31 years of age, Neal is one of the oldest and most experienced players in the new side, taking the opportunity to lead by example and help younger players improve their skills.

“Being new was always exciting,” Neal said. “We get to choose how people view us and the culture we create will then pass on … having new players who haven’t had much time in the VNSL, (we’re) teaching them they have to be consistent and always be on your game otherwise you can lose to any team.”

Though having a slow start to 2019, Neal is confident that Pulse is on the right track for building a confident and successful side. Pulse is captained by defender and English Roses captain, Ama Agbeze, a player Neal seems to admire and respect.

“It’s not every day you get to say you are captained by the England netball captain who won gold at Commonwealth Games,” Neal said. “Ama is a breath of fresh air as a captain and her expectations are realistic for a young team.”

Neal says crossing the globe to play in the English league from a young age was a no brainer. With a sibling playing in the league already, Neal was confident that she would fit into the competition.

“I wanted to test my ability in a different league… my sister had already been here since 2010 when I came over in 2013 and played for Surrey Storm.”

The midcourter is focusing mainly on the here and now in terms of her netball. But looking to the future, Neal says it is unlikely she will return to the Australian league as she suggests 2019 is her final season having played for close to 10 years.

“The game is more physically demanding and faster than it used to be… I’m only looking at this year as I don’t see myself playing after this season.”

Though playing netball back on Australian soil seems to be off Iimits after 2019, Neal says she is looking at options to return to Australia to start her post-netball life.