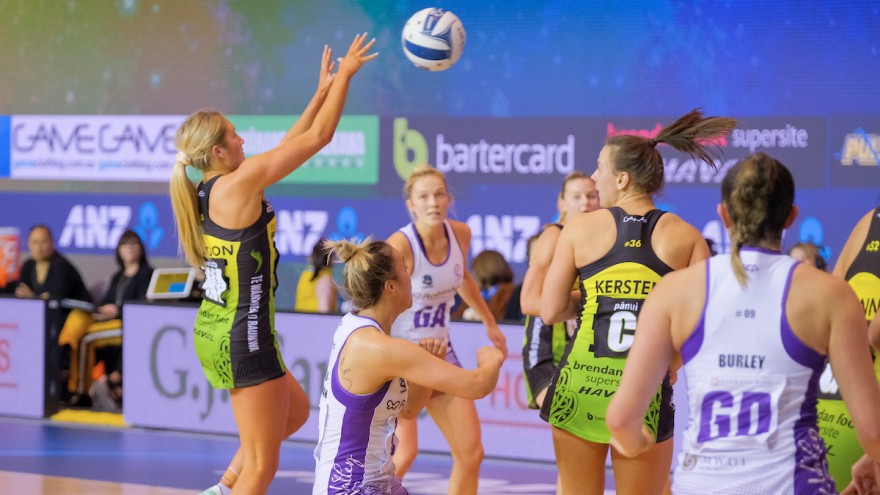 AFTER their dominant display against the Magic on Friday night, the Central Pulse faced a much greater challenge against the Northern Stars. The two teams were going toe to toe, and even though the Stars have never beaten the Pulse there was a sense they could defy the odds and make history. However, after a terrible final quarter the Stars wasted their chance, going down by 10 goals with a score of 46-36, despite leading a three quarter time. This was another gritty display from the Pulse who are proving every game that the hardest thing to beat is a winning mentality.

From the opening whistle Stars displayed their fluidity and connections throughout the court and showed good patience. Despite the reputation and presence of the Pulse side, the Stars were holding their own and knew they would need to produce something special to beat the reigning champions. The Pulse were a little slower to start than usual, however even a sluggish Pulse side is one to be wary of. The Stars looked determined, and there was a sense that they didn’t want things to go down the way they had when the Pulse played the Magic. The matchup between Grace Kara and Karin Burger was interesting to watch, with Kara using her fake really well to distract Burger and command the attacking end. Pulse were efficiently exploiting the height difference between Aliyah Dunn and Kate Burley with Ameliaranne Ekenasio drawing Storm Purvis out of the goal circle. It was a question of who would break their focus first, and a held ball from Claire Kersten gave the Stars the edge early on. They held strong and a rare miscommunication from the Pulse towards the end of the quarter allowed the Stars to maintain their advantage. They headed into the break with a comfortable three goal lead.

Pulse came into the second quarter firing and started to make more use of the short, sharp play which they do so well. The Stars were showing great patience in their attack end with Jamie Hume supporting Maia Wilson nicely, despite having Katrina Rore on her like a backpack. Both Stars and Pulse were looking in early to their shooters and finding each other with ease, meaning that the defensive ends weren’t picking up as much ball as usual. As the quarter progressed, the Pulse started to force the Stars on top of each other. Burger caught Kara standing still and waiting for the ball and pulled off a classic intercept which gave the Pulse the lift they needed to go on a run of five. Kelly Jury was having a standout game, racking up six deflections before half time, while Rore had the measure of Hume and was keeping her totally preoccupied. Pulse have proved that when your defensive line are this strong, you can afford for your attack to have an average day at the office. However Stars weren’t ready to give up, and capitalised on a Pulse error to claw back into the game. An unfortunate attacking contact from Maia Wilson meant a beautiful long bomb from Hume was disallowed, and Pulse seized their opportunity to strike, winning the quarter by six goals and heading into the break with a score of 21-19.

Stars were by no means out of the contest and were determined to get back on top. They had managed to force ten turnovers before half time and were looking confident and hungry to win. Unfortunately for Stars, the Pulse shooters were on form, with Aliyah Dunn having a fantastic game, even earning a deflection, and shooting flawlessly at 100 per cent.

A third quarter change saw Fa’amu Ioane replace Lisa Mather at wing defence and make an impact for the Stars lineup. Mather had coughed up possession three times on transition play and this game was too important to risk giving up easy ball. The Stars defence forced another held ball, and the partnership between Burley and Purvis was really blossoming. This was the start of a comeback from the Stars and they managed to gain momentum and pull into the lead. The Northern side started to entertain the prospect that they could actually win. They held their lead going into the final break, winning the quarter by four goals, and the score was 32-30 to the Stars.

The final quarter was when the Pulse really put their foot down. Tiana Metuarau replaced Maddy Gordon in wing attack, and this change upset the rhythm of the Stars defence, causing them to lose focus. With the ever reliable Ekenasio commanding the side, Pulse set their minds on pulling the score back. Despite the best efforts of the Stars defence, they could not stop Metuarau who was displaying amazing vision and willingness to let the ball go early. An attacking contact from Kara allowed the Pulse to sneak five in a row, and all of a sudden they had all the momentum in their favour. A crucial miss from Wilson enabled the Pulse to further capitalise on their lead and it was just too easy for their shooters to make it to post. In a final roll of the dice, Oceane Maihi – a notorious ball winner – came into goal keeper, and pushed Storm Purvis out to goal defence. Unfortunately it was already too late and the Pulse were out to a 10 goal lead which they held onto for the remainder of the game.

Despite looking like they might manage a win at times, the disastrous 16-4 final quarter was a disappointment for the Stars and doesn’t reflect how well they tested Pulse throughout the game. Accuracy became an issue for Hume, and she finished the game on just 54 per cent. Stars played well, picking up plenty of ball defensively and you can see they have potential to really challenge the top teams. They need to work on closing games out and produce a consistent 48 minute performance when they take on the Tactix in their next game. The Pulse will have a well earned rest and will want to work on starting their game strongly against the Mystics next week to avoid another scare.