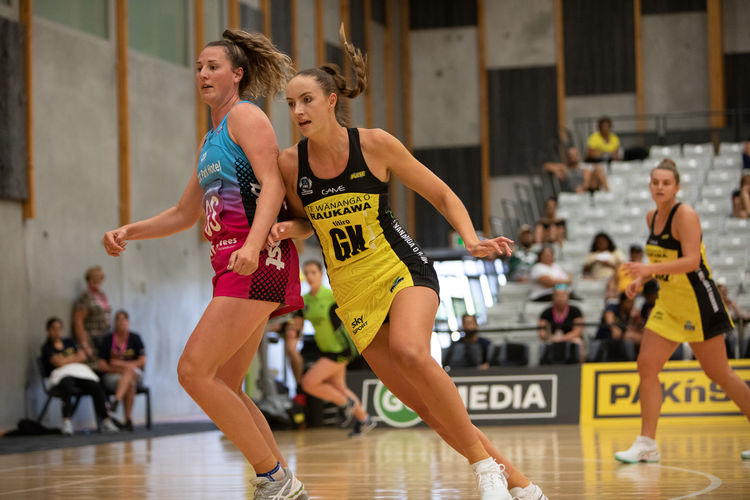 EACH week Draft Central will analyse the performance of one key player from across the ANZ Premiership and delve into what worked well and crucial moments in the game. Round 2 of the ANZ Premiership brought plenty of intensity and heat with each team stepping out on court and showcasing their dominance with the Central Pulse well and truly announcing themselves as fear competitors with Kelly Jury the key focus of this article.

In her second game at the club Jury took no time to adjust to her new settings and pounce on everything that came her way. Her lean over the shot and intimidating nature was on full display acting as a constant threat in the goal circle with her long limbs and read of the play. Recovering from a shoulder injury the goal keeper seemed to have a new lease on life, not even donning her usual shoulder strapping. Covering the court with ease, Jury played with plenty of freedom thanks to the defensive prowess of partners in crime Katrina Rore and Karin Burger. The combination between the three of them worked dividends with the Pulse able to render the Stars to a mere 39 goals for the game showcasing their suffocating pressure.

Jury was on the ball from the outset forcing two consecutive missed shots from the Stars and most importantly gobbling up the rebounds. Her positioning in the goal circle was on point, able to hold out the likes of Jamie Hume and Maia Wilson such was her strength. Her ability to read the play and slot into the hole was second to none, constantly putting doubt in the feeders minds.

Although Wilson seemed to get on top in the tail-end of the first quarter and opening minutes of the second Jury was not about to be beaten with the 23-year-old backing her strength, quick footwork and movement to block any easy access into the goal circle. The battle between Jury and Wilson was intriguing with the two tall timbers going toe-to-toe and relying on their aerial ability to cause havoc. Renowned for her defensive pressure, Jury also showcased her skill to create attacking forays by moving the ball quickly out of defence into the goal circle.

But the third quarter is where Jury really came to life with the defender putting on a masterclass in the goal circle racking up a staggering seven gains and five intercepts. She was simply involved in everything that came her way and was not afraid to throw her weight around. Her balance inside the goal circle and cleanliness to remain in play was a testament to her skillset, leaving many onlookers in awe. Jury proved to be too strong for Wilson, overpowering the goaler with her timing, read of the play and innate nature to hunt the ball. Her quick hands and lean over the shot made her a commanding presence throughout the game and while she finished the game on the bench, her efforts throughout the first three terms were unmatched.

It was a stats filling performance by the goal keeper, with Jury amassing nine gains, six intercepts, two rebounds and one pick-up. The most impressive stat being that she only collected 12 penalties for the match, credit to her high netball IQ and clever movement to avoid infringements.