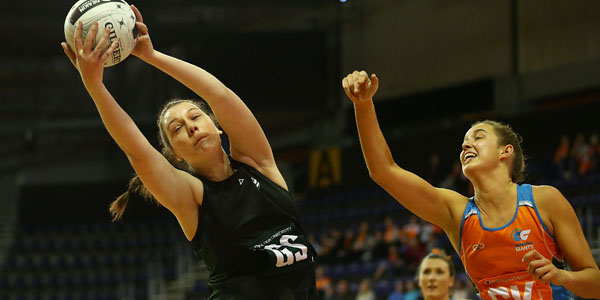 WITH the semi-finals approaching we cast an eye over the match-ups with the top four all set to do battle. Victorian Fury and Canberra GIANTS face off first at the State Netball and Hockey Centre with the NSW Waratahs and Tasmanian Magpies following. All four sides have shown they have plenty of class and game changers if given the chance with the winner from both games going on to play in the grand final on Sunday.

Last time they met the Fury had the last laugh with two convincing wins over the GIANTS in Round 1. But both sides have come a long way since then with their connections down the court developing.

Emma Ryde is the most prolific shooter in the competition posing a dominant threat for the GIANTS if they are unable to quell her influence under the post. Ryde averages 37 goals a match but can do much more damage while her imposing figure in the goal circle makes her an easy target to cite for Fury feeders. Her partnership with the likes of Sacha McDonald, Ruby Barkmeyer and Mikaela Vaughan will prove to be crucial up against the GIANTS if they want to surge ahead into the grand final. Defensively the Fury have some skilled players that can win ball back with Rudi Ellis and Jacqueline Newton able to apply good defensive pressure over the shot. Through the midcourt the likes of Kate Kelly-Oman and Elle McDonald work tirelessly to feed the ball into the circle and re-position in the attacking third to provide outlet passes.

The GIANTS should not be underestimated possessing some serious scoring power with the likes of Georgia Marshall, Amber Brophy and Angelina Frketic all able to turn a game on its head with their accuracy to post. The connection between Marshall and Frketic is second to none with the two finding good space and using their dynamic movement to open up space in the goal circle. Marshall is the leading goal scorer for the GIANTS with 421 goals for the season showcasing her ability to turn and shoot. Taylah Davies, Latika Tombs and Madeline Hay are all important players through the midcourt for the GIANTS credit to their ball speed and will have to be on their game to make the most of their opportunities across the court. Defensively the duo of Teigan O’Shannassay and Matilda McDonnell will have their work cut out for them against the likes of Ryde who uses her height and body positioning to her advantage. But the two work well together, rotating cleverly through the circle and applying strong pressure to confuse the space.

Reigning premiers, the Tasmanian Magpies will be hoping to go move through the semi-final stage and go back to back after claiming the premiership last season while the NSW Waratahs will be wanting to end those aspirations. In their previous encounter the Magpies went down narrowly to the Waratahs making for a close contest come the semi-final.

The Waratahs have some influential players right across the court with the likes of Sophie Halpin and Abbey McCulloch dominating in that wing defence position and providing good drive through the midcourt to help to propel the ball into attack. Both players are renowned for their tenacity and hands over pressure to win ball back for their side. Up the other end of the court there are plenty of options under the post with Matisse Letherbarrow, Sophie Dwyer, Alison Miller and Kelly Singleton all posing a threat under the post. Dwyer sits tenth on the ladder for goals scored with 226 with Letherbarrow and Miller hot on her tail with 179 and 171 respectively. All four shooters have shown that they can shoulder the load and post hefty totals to get the Waratahs over the line while the work of Elle Bennetts through the midcourt provides plenty of opportunities for the goalers.

The Magpies have been here before and know exactly what it takes to make it all the way. They have no shortage of star players across the court with the likes of Matilda Garrett available for selection. Fellow defenders Sharni Lambden, Zanna Jodlowska and Brooke Allen are key players for the Magpies given their ability to win ball back and nullify their opponents influence under the post. Through the midcourt the Magpies ooze some dynamic movers with the likes of Kelsie Rainbow and Vanessa Augustini. Both players hit the circle edge with pace and precision to continuously deliver the ball into the shooters under the post. Meanwhile, the partnership between Samantha Gooden and Jane Cook is formidable given their ability to score quickly and accurately. Cook sits second on the ladder for the number of goals scored just behind Ryde with 470 goals averaging 31 goals a game at 88 per cent making her a real threat of they can get the ball to her.