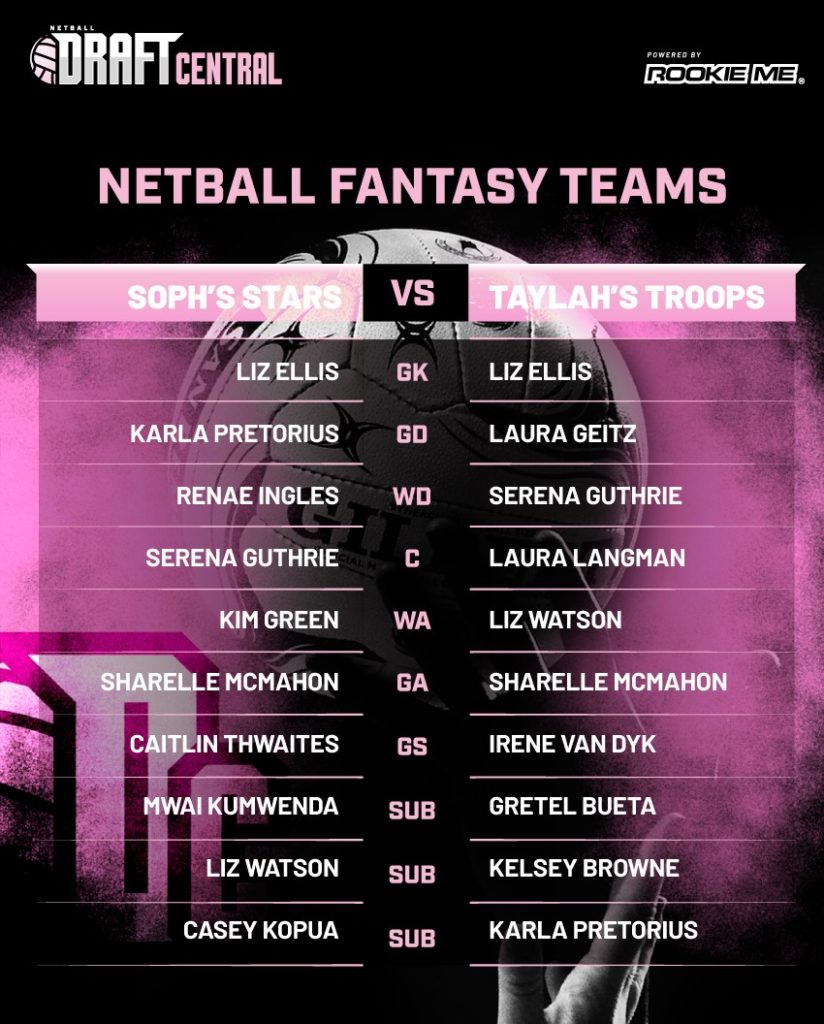 IN a battle of Draft Central writers and Centre Pass Podcast presenters, Sophie Taylor and Taylah Melki have compiled their respective “dream teams” consisting of players from across the globe both past and present. There are a few common players throughout but both have brought their own reasons to the table making for an interesting match-up.

Anyone who knows me or has listened to the podcast will not be surprised by my goal circle selections for this head to head. In goal attack I have the one and only Sharelle McMahon. She is one of my netball icons and has been since a young age, and her resilience and leadership both on and off court is something that I have always looked up to. Her ability to impact the play off the ball and her approach to the goal circle were both things that I took away from her time on the domestic and international stages. In at goal shooter is Caitlin Thwaites, one of my all time favourite netballers with her cleanliness and ability to constantly one-up her game and create plays in the circle. Both players have certainly influenced me as a netballer and are such striking players with their poise and accuracy on court, able to form crucial pairings with their teammates for a cohesive circle combination – I have no doubt that they could get on court together now and form a threatening pair in the goal circle.

Through the midcourt I have chosen two ex-Diamonds and an England Rose, with the centre bib going to Serena Guthrie. She is one of those exciting players who can win a game off her own back, but what I like most about Guthrie’s game is her defensive approach to the centre position. Her speed and resilience to just keep going is impressive while no one can beat her in the athleticism department. For wing attack I had a harder time making a choice but ultimately went with Kim Green. Green is another of those players who can race around and have an impact wherever she goes, but her speed at the centre pass and feeds on circle edge are what drew me to her as a fan. She’s a real workhorse who gets the job done without all the flair and dramatics which is what really draws me to her on the court and she’s just a genius with how she puts the ball into the circle. Wing defence was another tough choice for me to make with a few names coming to mind, but ultimately I had to go with one of the most consistent wing defenders in the competition for a long time, Renae Ingles. What I love most of all watching her is her speed and ability to have an impact both on and off the ball, phasing out her opposition and doing the hard work to allow her circle defenders to maintain control and propel the ball back to attack.

I have the one and only Karla Pretorius out in goal defence for obvious reasons – she is the best defender in the world at the moment and is a constant threat both in and outside the circle. Her ability to spark fear in her attackers without the messy physicality is a critical part of her game and something that netballers of all ages can come away with after watching her. Back in goal keeper is Liz Ellis, predominantly because when she was at her best, she was near-on unstoppable in defence. Her confidence and ability to influence the play was second to none, constantly providing a force in the circle which was testament to her work rate and constant drive for possession.

On the bench I have a few more internationals in Mwai Kumwenda and Casey Kopua heading up opposite ends of the court. Kumwenda’s constant drive to improve her game and ability to adapt is testament to her impressive work ethic, making her a big threat at the post with speed and accuracy alive. As for Kopua, there is no denying her skill, precision and tenacity to get that massive intercept and throw the whole game off kilter. There were a plethora of midcourters to choose from but I ultimately went with Liz Watson. Her constant drive and intensity in attack is impressive and she is a real pillar of strength for both the Melbourne Vixens and Diamonds. Watson’s ability to step up again and again is something I really admire, pushing herself to be the very best and providing a real threat in attack.

It was not an easy decision trying to figure out my all-star team but I think I have finally settled on a squad that oozes plenty of class, excellence and netball royalty. Starting in the goal circle it is hard to go past the most capped international player in netball history Irene Van Dyk. The New Zealand goal shooter was unstoppable under the post with her accuracy, high volume of shots and strength to single handedly take apart opposition defenders. In at goal attack is none other than Sharelle McMahon. It is fair to say that McMahon was one of the classiest netballers to grace the court, with her slick movement, precision with ball in hand and agility, throw in her accuracy and netball smarts and she was an easy selection.

The midcourt is headlined by international stars with veteran Laura Langman taking the centre position. Her sheer dominance across the court, ability to run both ways effortlessly, deliver pin-point precision passes into the circle and create defensive turnovers has earned her the position just nudging out Serena Guthrie. However, given Guthrie’s versatility to move into wing defence from centre, I pushed the defensive minded midcourter into wing. Her athleticism, tenacity and high level of endurance are just a couple of key attributes in her game play. While in at wing attack is Australian Diamond, Liz Watson. She boasts an impressive bag of tricks ranging from balance around the circle edge, quick footwork, good vision and silky hands to consistently deliver well-executed and perfectly weighted passes to her teammates.

This was arguably the hardest decision I had to make given there are so many highly talented defenders. Australian netball hero Liz Ellis gets the nod in goal keeper for my side thanks to her continued dominance. She was a key contributor to the Diamonds guiding them to countless victories with her intercepting abilities, read of the play, long arms and ability to shut down easy entrance into the goal circle. Although she is not in her usual position of goal keeper Laura Geitz is simply too good to sit on the bench hence the goal defence position. Over the past 10 years Geitz has been one of the most influential defenders with her attacking intent, nous to force turnovers with her continued pressure and skill to make something out of nothing.

Rounding out the final spots and unlucky not to get the start is South African defender Karla Pretorius. The exciting goal defence is a real livewire across the court with her dynamic movement, quick feet and long reaching arms to disrupt the attacking flow. Kelsey Browne has been chosen to fulfil the other midcourt position to help provide another attacking option given her speed off the mark and quick release into the circle. The final spot goes to the unpredictable and athletic Gretel Bueta. She is not the most conventional shooter and that is exactly why I chose her. Bueta is explosive on the court, creating plays out of nothing and more importantly has become incredibly reliable under the post to put up shots at a high accuracy.

Which team do you think would win this clash?
Created with QuizMaker