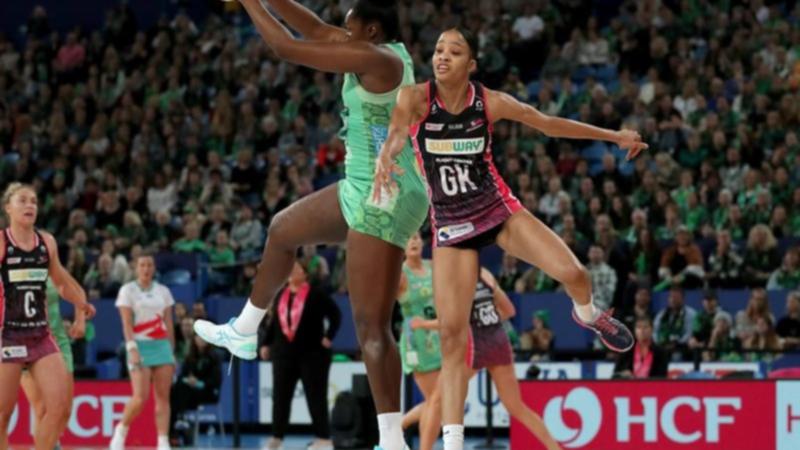 ROUND 14 in the ANZ Premiership and 11 in the Suncorp Super Netball rolled around and it did not disappoint with a number of players racking up the stats. We take a look at some of the top performers across both leagues.

Southern Steel goal shooter, George Fisher was accurate to post nailing 33 goals from 34 attempts, at an impressive 97 per cent accuracy. In fact it was the round of goal shooters as Caitlin Bassett impressed under the post with her 40 goals from 42 attempts, and Ellie Bird did enough to get the Tactix over the line with her 38 from 42 attempts at 91 per cent. Grace Nweke continued to top the table with a round high 52 goals from 61 attempts albeit at a slightly lower conversion rate than she would like at 85 per cent. It was a rough day at the office for Maia Wilson with the Stars captain only managing a mere 11 goals from 21 attempts at a lowly 52 per cent. But that did not stop Jamie Hume from stepping up to the plate nailing 30 from 38. Speaking of goal attacks Tiana Metuarau was as dominant ever for the Steel finishing with 13 goals and 14 goal assists. After a shaky start Te Amo Amaru-Tibble worked herself back into the contest with her 18 goals from 26 attempts as Te Paea Selby-Rickit finished with 10 from 17.

Accuracy proved to be no issue for Shimona Nelson with the Magpies goal shooter sitting at 100 per cent with 37 goals straight. Lenize Potgieter also shot at 100 per cent for the Thunderbirds nailing 26 goals while Jhaniele Fowler was hot on her tail with her 98 per cent accuracy but much higher volume thanks to her 57 goals from 58 attempts. Cara Koenen impressed playing out in goal attack managing 31 goals from 36 attempts as Peace Proscovia held her own in goal shooter with her 17 goals. Romelda Aiken shook off the yips early to nail 40 from 48, as Gretel Bueta imposed herself inside the circle with her 18 from 20 at 90 per cent, while also amassing 12 goal assists. The combination between Jo Harten and Sophie Dwyer was on song once again as they shot 33 and 21 respectively with the latter converting at 91 per cent. They also combined for five super shots. For the Swifts, Sam Wallace was down on her accuracy sitting at 81 per cent but still managed to hit the scoreboard in a big way with her 39 goals. Mwai Kumwenda was once again the most dominant shooter for the Vixens scoring 33 from 37 at 89 per cent.

West Coast Fever midcourter Verity Charles led all comers with her 27 goal assists as teammate Jess Anstiss chimed in with 15 of her own. The feeding was shared around in the Firebirds camp as Kim Ravaillion topped the table with 17 goal assists as Lara Dunkley managed 10. Paige Hadley was a commanding presence through the centre third racking up 17 goal assists while Maddy Proud found her groove in attack and defence with 11 goal assists and one intercept. Maddie Hay and Jamie-Lee Price were unstoppable for the GIANTS with the former amassing 19 goal assists. Teammate, Amy Parmenter fired on all cylinders in wing defence with eight deflections and two intercepts. Kelsey Browne was an energiser bunny for the Pies in what was a stats stuffing performance racking up 17 goal assists, two deflections and an intercept as Molly Jovic also plied her trade in the Collingwood frontend with her 15 goal assists. Hannah Mundy continued to consolidate her form leading the way for the Vixens with 16 goal assists.

Defensively Karin Burger starred for the Tactix as she racked up five intercepts, three deflections and two rebounds in what was an all-round stellar performance from the goal defence. Jane Watson showcased her read of the play racking up four deflections, while former teammate and current Magic goal keeper Temalisi Fakahokotau was amongst the thick of things with her six gains. Erena Mikaere utilised her long arms to rack up three deflections. Kelly Jury and Kelera Nawai combined for four gains and six deflections as Sulu Fitzpatrick impressed for the Mystics with her three gains. Goal keepers Taneisha Fifita and Anna Harrison imposed themselves racking up eight and seven gains apiece with the latter reeling in five intercepts credit to her go-go gadget arms.

Jodi-Ann Ward was once again at her best for the Magpies collecting nine gains, eight deflections and a couple of intercepts while Geva Mentor also showcased her class in goal keeper registering seven gains. The combination of Jo Weston and Emily Mannix was on full display as they combined for eight gains. Sarah Klau was a pillar of consistency for the Swifts recording four gains and six deflections as crosstown rival Sam Poolman was just as damaging for the GIANTS with her eight gains and four deflections. Adelaide Thunderbirds defender Shamera Sterling impressed with her six deflections, two intercepts as Matilda Garrett got busy with her four deflections. Courtney Bruce got plenty of hands to ball finishing with four intercepts and two deflections as Sunday Aryang took advantage of her long limbs and closing speed to pick up five deflections and four gains. Kim Jenner and Rudi Ellis imposed themselves with a combined 10 deflections.