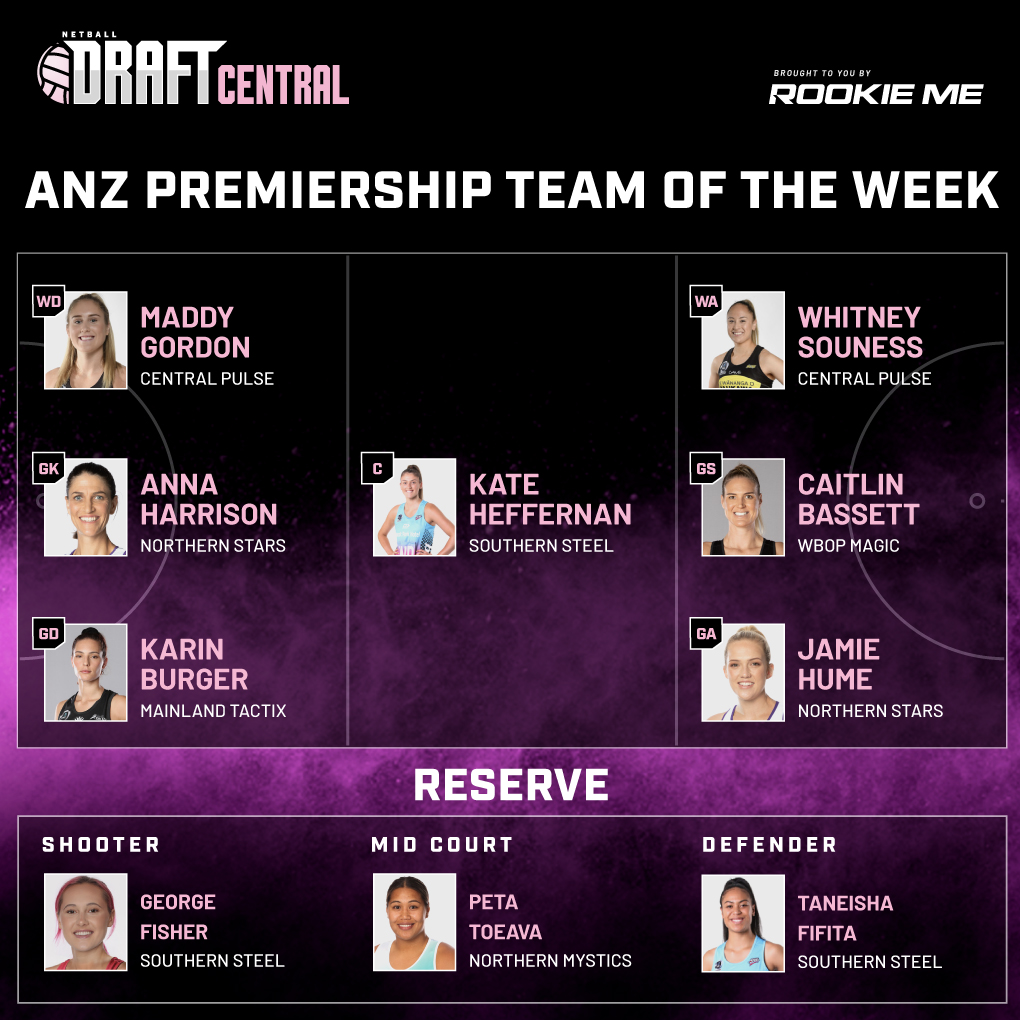 THE penultimate round of ANZ Premiership brought plenty of blockbuster results and huge individual efforts to get their respective sides over the line. The Southern Steel collected a huge win and with that had two players make the squad, and while the Pulse and Magic fell short in their matches, they still had a number of key contributors.

It was arguably Caitlin Bassett‘s best game to-date since joining the Waikato Bay of Plenty Magic and the goal shooter did not disappoint. She was an absolute nuisance under the post with her commanding presence, smarts and overall body positioning under the ring allowing her to dictate the flow in attack. The goal shooter was on song from the opening minutes of the quarter and did not relent with her accuracy to post and confidence. Bassett only missed one goal for the entire game and stood up to the continuous physicality, highlighting just how imperative she is to the Magic. Elsewhere, Jamie Hume had a game to remember for the Stars with the goal attack backing herself in from just about anywhere in the circle. Her classy movement and impressive timing was on full show throughout the clash while she also increased her volume to post nailing 30 goals from 38 attempts.

Speedster Whitney Souness found her groove this round hitting circle edge with great conviction and speed. She was a real barometer for the Pulse frontend, setting up the attacking forays and dictating the pace of the game with her nice timing and deft passes. Getting the nod in centre is Kate Heffernan with the Southern Steel midcourter proving to be a crucial cog in both attack and defence. Her two-way running and sheer athleticism consistently sets her apart from the opposition while her long limbs enable her to employ a strong three-foot guard. She is quick on her feet despite her height and has good spatial awareness to deliver the ball into the circle with great precision and timing. Wing defence Maddy Gordon threw herself at absolutely everything that came her way and used her closing speed to shut down the space in a heartbeat. She was a real livewire for the Pulse, able to build pressure with her constant hustle around circle edge and sheer desperation to win ball back. Her tenacity and attacking nous enabled her to cut off drives and get hands to ball to create crucial turnovers.

It was another blistering performance from Karin Burger as the goal defence continued her ball-winning ways for the Mainland Tactix. Burger showcased nothing but class and timing to continuously turn her body inside out and create deflections aplenty. Her cleanliness and attack on the ball gifted the opportunity for the Tactix to win back possession as she continued to stand up in the big moments. Not only did Burger star in defence but so too in transition as she put on an absolutely stellar performance. Joining Burger in the defensive circle is the one and only Anna Harrison with the Stars goal keeper proving to be a real thorn in her opponents’ side. She was never far from the contest, with her long arms and physicality wreaking all sorts of havoc. Harrison continues to prove that age is just a number with her impressive elevation and netball smarts on full show throughout the entire four quarters. Her hunt and tenacity was undeniable earning herself another spot in our Team of the Week.

George Fisher was unlucky not to get the starting goal shooter position given her accuracy to post and volume for the Steel in their win. Also unlucky not to make the starting seven was teammate Taneisha Fifita as the goal keeper proved to be a real menace with her constant niggle and tenacity while the final bench spot goes to Peta Toeava who was once again crafty with ball in hand for the Mystics.