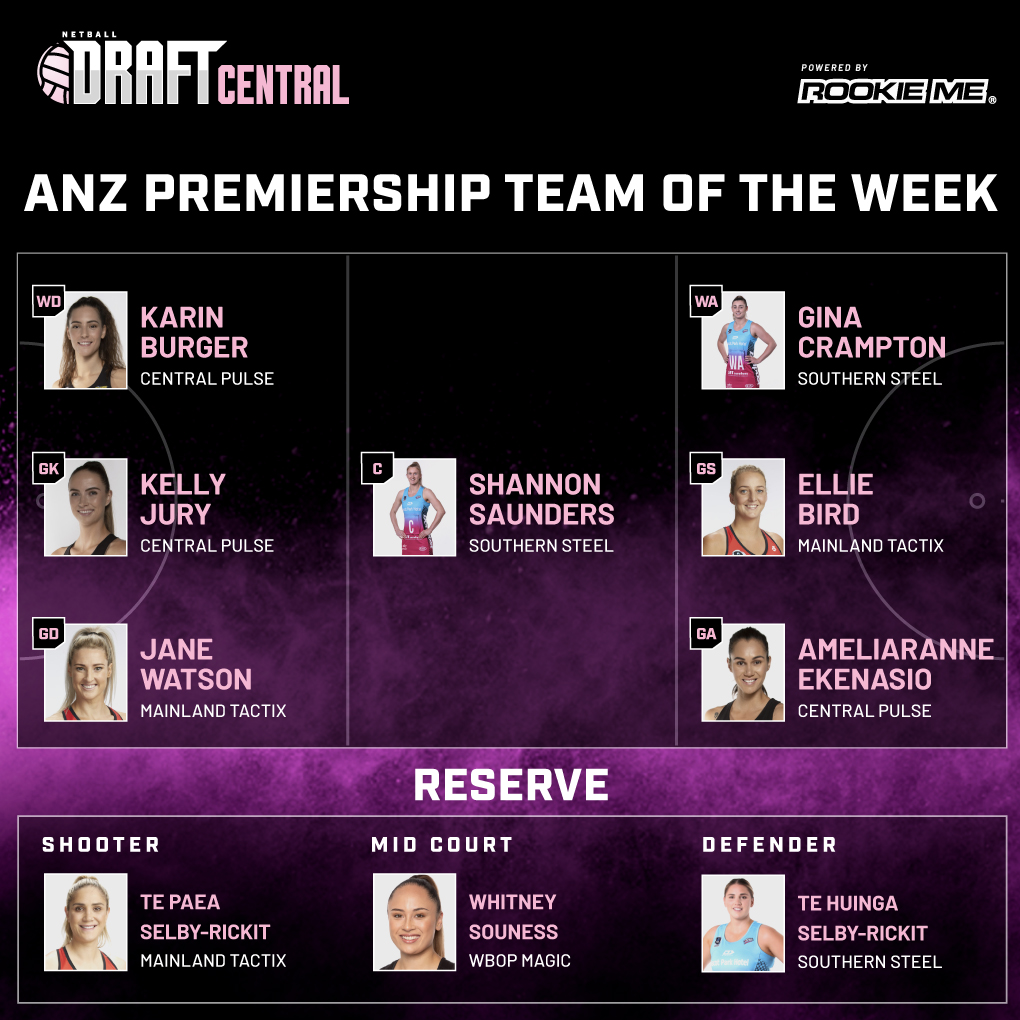 A BLOWOUT round of ANZ Premiership action saw plenty of mixed results in the last round of the centralised Auckland-based competition. Central Pulse once again put out some stellar performances seeing three Pulse players feature on court for our Team of the Week, while both Mainland Tactix and Southern Steel have two players on the court and one apiece on the bench after quality standalone wins. Waikato Bay of Plenty Magic sees one player sit on the bench, while both Northern Mystics and Northern Stars miss out this round based on the calibre of talent shown in some convincing wins.

The Draft Central Player of the Week for Round 7, Ellie Bird was a force to be reckoned with in goal shooter this round with her strong hands, accuracy and rate of improvement throughout the season. Bird is a confidence player and it was dripping off her this round, shooting 37 goals at 100 per cent proving far too strong at the post. Joining Bird in the circle is repeat offender Ameliaranne Ekenasio, with the Silver Ferns captain continuing to dominate not only creating attacking forays but also putting high accuracy on the scoreboard. Her 28 goal performance against the Magic – in less than a full game – was backed up against the Stars the following day with another 18 to add to her tally, only missing two shots across the round and influential in attack.

Through the midcourt, two Steel players are out the front with a stellar win behind them against the Mystics. Both Gina Crampton and Shannon Saunders had solid games, racking up 15 assists (36 feeds) and 17 assists (39 feeds) apiece, while Crampton also racked up a whopping 29 centre pass receives showing the quality connection between the two midcourters. Their transition down court saw bullet-like passes into the circle, and while the Steel were not the most accurate they certainly benefited off their feeders’ skill and speed. Also joining the Steel duo in the midcourt is Karin Burger after another impressive performance, racking up two intercepts in both of her outings and once again making her mark on the competition to propel turnover ball back up the court.

In defence, unsurprisingly Jane Watson gets the start in goal defence after yet another impressive match. While taking on a couple of less experienced opponents in her standalone outing against the Stars, Watson was involved in everything and racked up six gains for her efforts, batting away ball with ease and clean as ever with just the three penalties to her name. Joining Watson down back is another returning name in Kelly Jury, with the Pulse goal keeper crucial once more and racking up eight gains (four intercepts, four rebounds) and four gains (two rebounds, one intercept, one deflection) across her two outings for another well-rounded effort.

On the bench this week are both Te Huinga and Te Paea Selby-Rickit, with the sisters both plying their trade well across their respective single outings. Te Paea Selby-Rickit may not be known for putting up a load of goals, but this round it was her effort off the ball that allowed Bird to shine and sees both players on the Team of the Week, with Te Paea Selby-Rickit amassing 22 centre pass receives and a whopping 27 goal assists to lead the round and go with her 10 goals at 83 per cent. Te Huinga Selby-Rickit was monumental in the Steel’s victory over the Mystics, racking up five gains (two intercepts, two deflections, one rebound) and also racking up an unexpected goal assist. Joining the sisters on the bench is Magic’s Whitney Souness, with the speedster not putting out her greatest effort against the Pulse but doubling her work rate for a stellar second outing against the Mystics a couple days later. Souness finished the round with 35 goal assists from 74 feeds to go with her combined 40 centre pass receives and two gains.