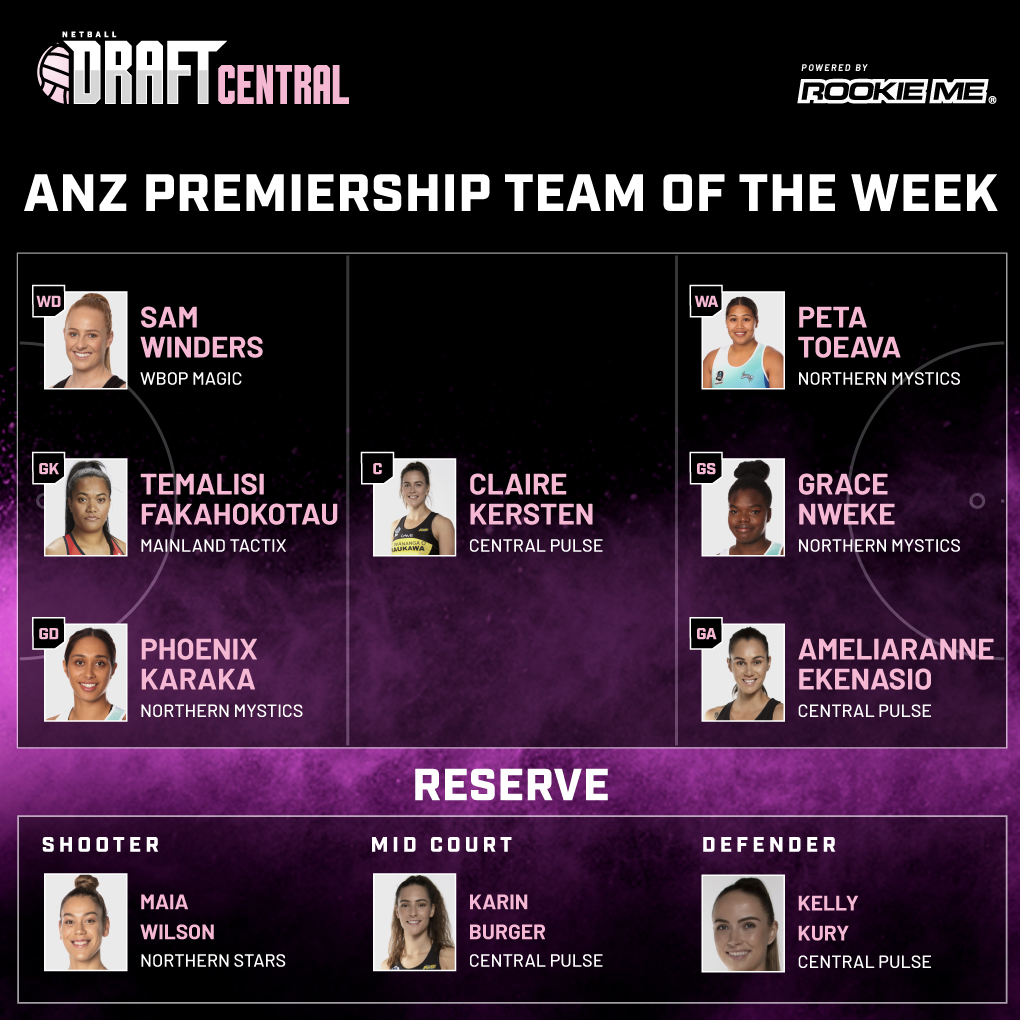 THIS week’s Draft Central Team of the Week was once again dominated by the Central Pulse and Northern Mystics, with the top two teams collecting big wins over their opponents. Strong efforts from a couple of key Tactix and Northern Stars players saw them earn a spot in the side while Magic registered their first player of the season.

After yet another astounding performance, teenager and shooting prodigy Grace Nweke earned herself the starting spot in goal shooter. Her commanding presence under the post, skill to withstand the constant barrage of physical pressure and composure was on display nailing an impressive 38 goals from 40 attempts at 95 per cent. For the third week in a row, Ameliaranne Ekenasio gets the nod at goal attack with the Pulse shooter impressing across the court and letting her shooting do the talking. Sitting at 100 per cent in her first outing and 88 in her second Ekenasio was too hot to handle, carving up the netball court with her clever movement, precision and playmaking abilities.

Through the midcourt, Mystics wing attack Peta Toeava shone once again with the dynamic centre court player using her pace and impressive vision to deliver ball into the goalers. Her speed off the mark, quick hands and work at the transverse was second to none amassing 18 centre pass receives and 25 goal assists. Consistent as usual, Pulse centre Claire Kersten plied her trade through the midcourt and showcased her durability playing all but one quarter across the two games. She had a combined 30 goal assists, while also getting a hand in defensively with an intercept and gain. In trying conditions, Magic captain Sam Winders announced herself as a serious competitor, working hard around circle edge to win ball back for her side. Although she did not play out the entire game on Sunday, she finished with two gains, one intercept and four deflections, though it was her heroics on Monday night that earned her the starting position taking the match saving intercept.

Mystics captain, Phoenix Karaka starred once again for her side with her tenacity, hunt for the ball and sheer determination. Her commanding presence down back enabled her to pick off a wealth of passes and wreak havoc collecting four gains, two intercepts, three deflections and eight pickups. Karaka was simply involved in everything, using her long arms, read of the play and speed off the mark to inflict pain. In at goal keeper is Temalisi Fakahokotau. Despite her side losing, Fakahokotau was a rock down back using her physical nature to collect timely intercepts and force turnovers. It was a stats filling performance for the keeper finishing with five gains, one intercept, two rebounds and three pickups.

Although slightly down on her usual high output, Stars goal shooter Maia Wilson secured a spot on the bench with 34 goals from 37 attempts at an enviable 92 per cent. Her ability to hold space and withstand the constant physical pressure under the post was a clear testament to her composed nature to post. Joining her on the bench is Pulse duo Karin Burger and Kelly Jury. Burger managed to collect five gains, three intercepts and five deflections out in wing defence while Jury imposed herself in the circle with seven gains, eight deflections and two intercepts.