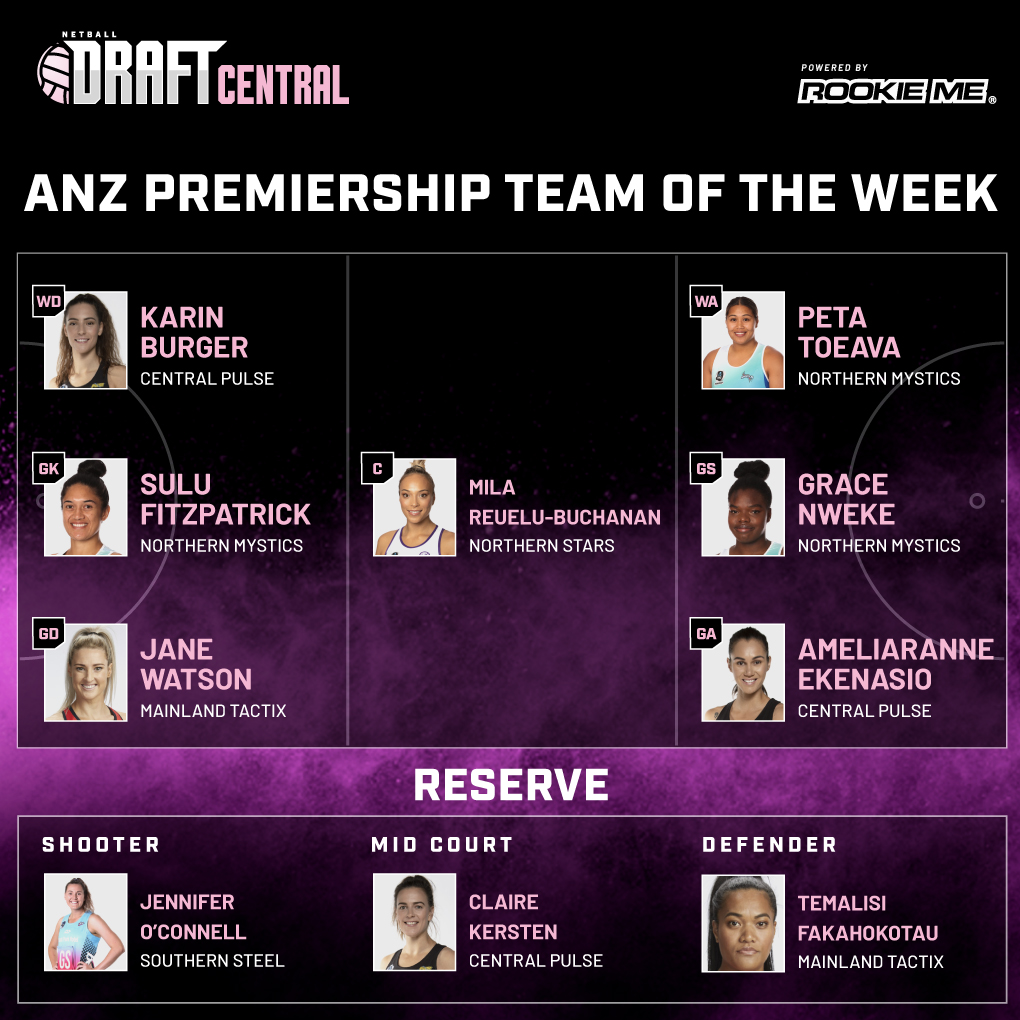 ROUND 3 brought plenty of action and close encounters with the Steel notching up their first win of the season and Tactix getting back on the winning board. A strong performance from the Northern Mystics and Central Pulse saw a couple of players catapult into the Team of the Week while the Magic failed to have anyone in the team for the second week in a row.

Mystics shooting sensation Grace Nweke earned herself the goal shooter position off the back of two impressive performances over Round 3. The young shooter could do no wrong bringing the ball down with ease, holding strong and commanding the ball 24/7. Her accuracy to post and high volume was unstoppable finishing the round with 63 goals from 73 attempts at 86 per cent. Back for her second week, Pulse captain and Silver Ferns star, Ameliaranne Ekenasio takes out the goal attack position with the talented goaler once again controlling the attacking third and dominating. Despite a challenging match-up Ekenasio rose to the occasion on Monday night displaying her high netball IQ to think her way through the pressure and letting her impressive circle movement do all the talking. She only missed three goals for the game sitting at 21 from 24 at 88 per cent.

The midcourt is filled with young energetic stars that can run all day and every day. Wing attack Peta Toeava was deadly from circle edge for the Mystics supplying plenty of crucial ball into the goalers and making it look easy. Her dynamic change of speed wreaked havoc for opposition sides while Toeava also seemed to have the ball on a string throughout each game racking up 39 goal assists, a testament to her high quality output. Although her side failed to win, Mila Reuelu-Buchanan impressed for the Northern Stars up against some talented opposition. Her gut running, class with ball in hand and pin point precision allowed her to be a threat from anywhere in the attacking third. She registered the highest amount of goal assists and feeds and for her side with 20 from 26 showcasing just how accurate she was with ball in hand. Taking out the wing defence position, is Karin Burger who despite having a slow start to the match steadily built into the game and was a key cog in defence finishing with three gains and three intercepts.

Coming off the back of a quiet performance, Tactix defender and captain Jane Watson delivered in the Round 3 clash. The goal defence put on a show and put any doubts about her knee complaint to bed with a convincing outing notching up five gains, two intercepts, two deflections and two rebounds while being a commanding force through the midcourt with 14 centre pass receives the second highest of anyone on her team. Watson left many fans in awe with the defender only registering the one penalty for the entire game in what was a stellar performance by the star defender. Joining her in defence is Mystics goal keeper Sulu Fitzpatrick who also put on a masterclass down back with her ball winning ways especially in her opening clash where she amassed nine gains and four intercepts. Fitzpatrick was involved in just about, using her physicality and hands over pressure to get hands to ball and deny any easy avenue to goal.

Unlucky not to make the starting seven, Jennifer O’Connell starred for the Steel across the weekend with her heightened volume and accuracy to post slotting 60 goals from 68 at 88 per cent. Through the midcourt Claire Kersten was dominant once again for the Pulse with 18 goal assists and two deflections while down back Temalisi Fakahokotau took out the final spot after showcasing her tenacity with six gains, three intercepts, four deflections and two rebounds.