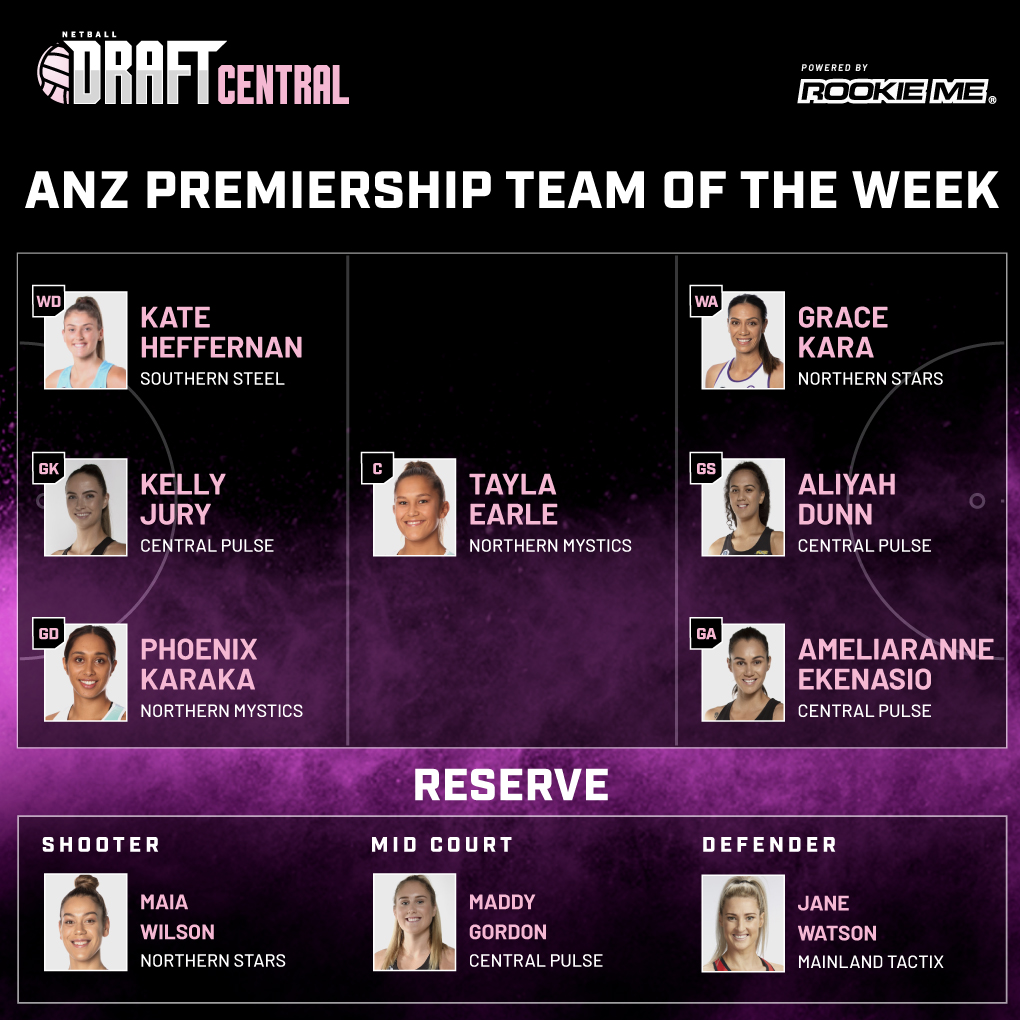 AFTER impressive performances across the returning round of ANZ Premiership action it was difficult to narrow down which players should get the nod for Round 2’s Team of the Week. A strong win to Central Pulse saw the reigning premiers secure four players in the team credit to their sheer dominance on court, while Northern Stars and Northern Mystics also managed two players apiece.

It is no surprise that the goal circle sees the combination of Pulse duo Aliyah Dunn and Ameliaranne Ekenasio. Dunn was simply too hot to handle for the defenders in Round 2 with the goal shooter building into the game and putting on a spectacle in the second quarter with 18 goals at 100 percent. She finished the game with 44 goals from 46 attempts proving just how much of a deadeye she is in the goal circle. Partner in crime Ekenasio was just as accurate to post only missing two goals for the game with 19 from 21. Her playmaking abilities were on show throughout with the goal attack seamlessly opening up space and delivering the ball on a silver platter to Dunn.

Through the midcourt Grace Kara took charge in the wing attack position for the Stars. Despite having a rather quiet game by her standards in the first game of the round, she took her play to the next level in her 150th match lighting up the court with her dynamic movement and pinpoint feeds. Tayla Earle took out the centre bib with the nippy midcourter showcasing her defensive pressure to win back a wealth of ball. She notched up four gains, four intercepts and two pickups while her efforts in attack also did not go unnoticed with 13 goal assists. The only Steel representative in this week’s team, Kate Heffernan showcased her potential and skill in wing defence. While it was not a stats filling performance from the youngster, her work rate, ability to get hands to ball and movement to clog up space earned her the spot racking up two gains, one intercept and two deflections.

Defensively there were a plethora of options but in the end it was Phoenix Karaka that stood tall for the Mystics. The talented goal defence was in everything, picking off passes, using her nifty footwork and read of the play to wreak havoc in the defensive third. Her cleanliness and skill to pick up ball was on show throughout the full 48 minutes amassing seven gains, three intercepts, three deflections and three rebounds. Pulse defender Kelly Jury takes out the goal keeper position with the 23-year-old lighting up the court with her hunt for the ball and execution. On song from the opening minutes of the game, Jury leaped into action collecting a staggering six intercepts, nine gains, three deflections and two rebounds while her hands over pressure also provided an intimidating element to the Pulse defensive unit.

Well held in her first outing, Maia Wilson came out with a real fire in the belly in her second game, owning the goal circle with her accuracy and high volume of shots. Although she was unlucky not to get the start slotting 67 goals from 76 attempts across the round Wilson proved to be no easy beat using her strong holds to command the ball. Speedy midcourter Maddy Gordon earned herself a spot on the bench after a dazzling performance for the Pulse with 19 goal assists and intercept to her name. Despite an un-Jane Watson–like performance in her second game of the round the skilful Tactix defender did enough to warrant a spot on the bench after picking up an impressive nine gains, three intercepts, eight deflections and two rebounds in her opening game.