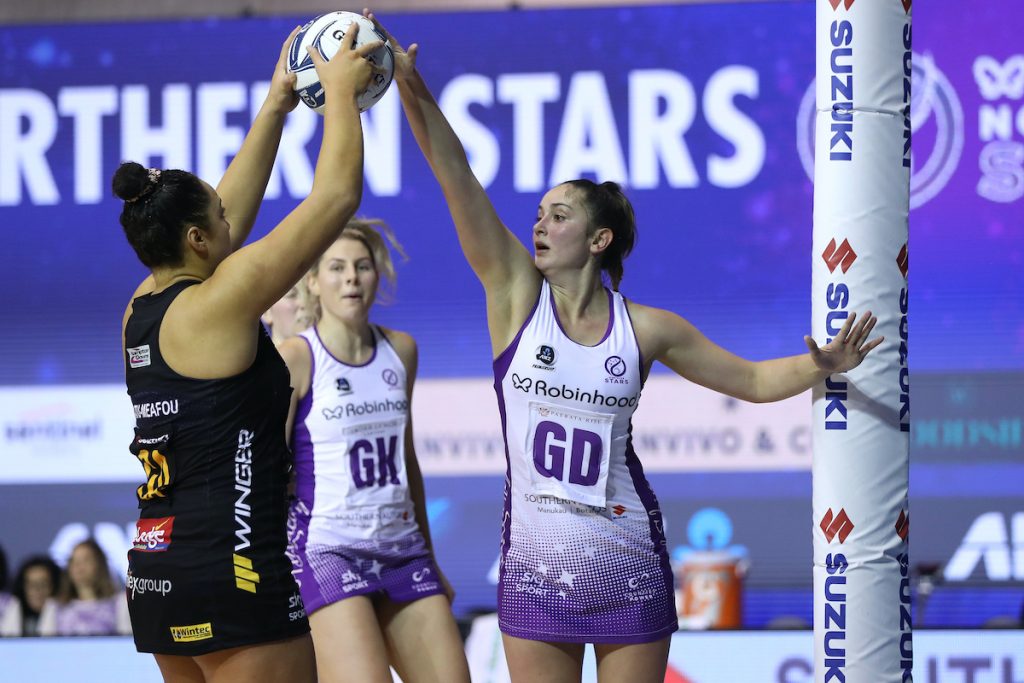 A WINNER could not be decided between the Northern Stars and Waikato Bay of Plenty Magic with the game resulting in the first draw of the season, 46 goals apiece. Playing their second game of the round, the Magic came out with a real fire in the belly, contesting every ball and taking an early commanding lead. Their ability to fight back in the dying stages of the last quarter was inspired by their captain, Sam Winders with the wing defence pulling out all the stops but it was not enough to get her side over the line and claim their second win of the season.

With the centre pass in hand it did not take long for the Magic to open their account at the hands of Abigail Latu-Meafou. Despite a disappointing output last night Latu-Meafou came out firing, using her precision with ball in hand and deceptive speed to insert herself on the contest from the get-go. Her confidence filtered across the court with the defensive unit of Erena Mikaere and Holly Fowler creating an early turnover ball from the Stars and propelling the ball back down court with plenty of haste. The defensive combo shut down Stars goal shooter Maia Wilson under the post, blocking her every move and forcing her into early turnovers. The Stars finally hit the scoreboard three and a half minutes into the quarter but it was not without plenty of hard work with the Magic holding a 5-1 lead. With Wilson well held, goal attack Jamie Hume upped the ante delivering a bullet pass into the goal shooter but it was not enough with the Magic returning serve up the other end and pushing out to a seven goal buffer. Much like Latu-Meafou, Kelsey McPhee stepped up to the plate with the goal shooter dominating under the post only missing one goal for the term and showcasing her fancy footwork on the baseline to score despite falling out of court. As the Magic motored on the Stars struggled as Wilson was forced to come out of the circle on the second phase to try and open up the attacking end.

With a handy five goal lead, Storm Purvis upped the ante in defence for the Stars winning an early turnover but her efforts were not rewarded with the ball lost in transition. An increased hunger for the ball across the court saw the Stars intensity lift and most importantly find better rhythm in attack, using their ball speed to pierce through the Magic defensive unit. With the Stars growing with confidence, McPhee and Latu-Meafou continued on their merry way but were denied the same easy access they were given in the first term. But it seemed to be all one-way traffic for the Stars in the second quarter with each player rallying to try and win ball back to reduce the deficit. In hope to quell the influence of Hume and Wilson under the post, dynamic defender Georgia Tong entered the court, replacing Fowler in goal defence. Going goal for goal through the mid part of the term, neither side was willing to give an inch however, Wilson upped the ante playing with more freedom and space while Magic wing attack Whitney Souness built into the game providing silver service to McPhee and Latu-Meafou with her skill to draw defenders. But a big intercept from Purvis gifted the Stars a chance to level scores and hit the front with the centre pass to come. The Magic quickly responded to go into half time at 24 goals apiece.

Known as the premiership quarter the Stars did all the running piling on 14 goals to seven. The introduction of Fa’amu Ioane in wing defence provided an extra layer of defensive pressure for the Stars with the tenacious midcourter taking Souness out of the game, covering her drives and using her physicality to offset Souness’ vision into the circle. The Stars struck first nailing the first goal of the second half before going on a mini goal spree and opening up a three goal lead. McPhee struggled to impose herself, shaky on the shot and allowing the Stars to capitalise in defence with clever rebounds. The quarter was plagued with patches of inconsistency, unable to find any real continuity with the likes of Mikaere constantly disrupting play for the Stars in attack thanks to her long limbs. Tong racked up the penalties forcing the Magic to look to the bench and bring Fowler back on while Khiarna Williams came on to replace McPhee and was quickly into the action missing the shot but then getting back and helping to defend. With the Magic throwing ball away Stars continued to push ahead, with Purvis taking another strong intercept and showcasing her read of the play and aerial presence to open up a seven a goal lead.

With the game on the line the Magic came out with a renewed sense of purpose and intensity, fighting hard from the opening minute of the quarter. Souness collected an early turnover with a crucial intercept in the midcourt to reduce the margin to six sparking her side to go on a two goal run. Souness continued to up the ante showcasing her impressive vision to release the ball from range into McPhee. The tables continued to turn with Magic taking a huge rebound with the centre pass to follow and cut the margin down to three goals. With pressure mounting, Wilson remained confident on the shot, shouldering the load of Hume who seemed to have gone off the boil. Goal defence, Kate Burley delivered for the Stars with a big tip and Ioane backing her up across the court. The Stars pushed the lead back out to six goals but the Magic were not done with yet cutting the lead to four goals with less than three minutes to play. The experienced Mikaere took with a huge rebound, dwindling the lead to two goals before McPhee impressed with a strong offensive rebound. But it was Winders who stole the show with a huge intercept in the attacking third to level the scores before the whistle blew.

Wilson was huge for the Stars sitting at 34 goals from 37 attempts at 92 per cent while Hume slotted 12 from 17 at 71 per cent. McPhee also struggled for accuracy only converting 28 of her 37 attempts at 76 per cent while Latu-Meafou managed 17 from 20. Defensively Mikaere starred racking up four gains, seven deflections and two rebounds.